David Icke is a Neo-Nazi (Part Three): My Shadow, or the "Turd in the Punch Bowl" 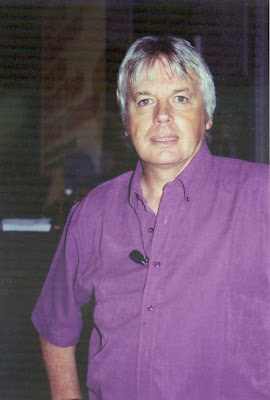 I have felt, since first hearing of Mr. Icke, that he was put out there to discredit me specifically. His conspiracist sci-fi confabulations, or "research," tracks my own themes (mind control, political assassinations, fascist globalism, etc.) in a grossly distorted form.

He boosted my writing on the Simpson case whole, for instance, and mixed it up, defiled my research, with "Lizard Aliens." He's a repulsive parody of myself ...

I've attempted to read the capricious, wrong-headed "research" of David "Jesus" Icke, and found it an amateurish omelot of used conspiracy theories concocted by the John Birch Society and other far-right groups to discredit legitimate research on fascism, which is inherently conspiratorial. Most people, dumbed down by "mainstream" media, can't tell the difference, and Icke takes advantage of that fact to peddle stupid, far-right conspiracy theories and "alien" invasions.

Icke - who took up conspiracy writing, c. 1990 - about the time the CIA silenced me with constant harassment, torture and death threats - is tailor-made to cast a pall on my own field, my own work, and he's been doing it for years. - AC

" ... The death of Princess Diana? A ritual sacrifice of a moon goddess who had criticized her husband's reptilian royal family (443). ... "

The Robot's Rebellion is a conspiracy theory which claims a group of aliens and well-connected people, called the 'Illuminati', are manipulating and controlling world events with a view to establishing global domination.

One of Icke's main sources is a notorious document called the `Protocols of the Elders of Zion', which he renames `the Illuminati Protocols'. It states that Jews are trying to take over the world, and was used by the Nazis to justify the genocide of 6 million people. The Waffen SS used to carry copies in their knapsacks.

By using this document Icke denies the word of those historians who have demonstrated, beyond doubt, that the Protocols are a forgery. He also gives credence to those groups who still use the Protocols to justify their anti-Semitism. [end quote]

David Icke did extensive damage to the credibility of the Greens with his anti-Semitic writings and claims to be a son of god. His ongoing attempts to gain credibility for himself from his prior association with our party makes the damage all the more egregious and ongoing.

The Dark Side of David Icke

He may seem like a harmless eccentric, but, says MARK HONIGSBAUM, some of the views put forward by self-styled guru David Icke, currently lecturing round Britain, are dangerously popular with anti-Semites and neo-Nazis.

It has become fashionable, even among adherents of the New Age, to dismiss David Icke as a crank. For a long time now the former Green Party spokesman and self-styled "Son of God" has been collecting fringe beliefs and theories like other people collect new shoes. UFOs, CIA "mind control", world apocalypse - you name it, David Icke has tried it.

But judging by the response to Icke's current lecture tour of Britain, he is no longer quite the figure of fun he used to be.

At a recent meeting in Glastonbury, for instance, more than 100 people paid 5 pounds each to hear his views. During the lecture, David Taylor, a national spokesman for the Green Party, repeatedly heckled Icke about his use of the notorious anti-Semitic forgery, The Protocols of the Elders of Zion. Meanwhile, the Jewish Chronicle has been pressing Icke's Bath-based publisher, Gateway, to reveal the truth about the manuscript of his latest book, said to contain offensive revisionary passages about the Holocaust.

Now uncanny parallels are emerging between Icke's thoughts - if that
is not too grand a term for his mishmash of conspiracy theories and
New Age - and the writings of senior figures in the armed militia
movement in America. ...

... The author goes on to postulate a race of reptilians that has controlled human society from its very beginning. These beings, which Icke calls by the Sumerian[3] word "Anunnaki," infiltrate human society through interbreeding with humans and placing their crossbred offspring into roles of power in human society. The evidence he offers to support this claim, as the late conspiracy expert Bill Keith has pointed out, is hardly of academic quality. The evidence ranges from crackpot etymology (vampires are reptilians because "Dracula" sounds like "Draco" and so on) to references to books that have been repeatedly debunked by scientific experts. Keith characterizes Icke's scholarly methodology as "Believe every goddamn weird thing anybody, anywhere ever said."

The poor quality of Icke's scholarship should be obvious to any reader with a middle-school education, and yet his work resonates with many people. A closer investigation into Icke's vision of Anunnaki infiltration helps to explain the appeal his writings have for his small but loyal group of followers. For Icke, the story of human enslavement by reptilian forces begins about 450,000 years ago. Paraphrasing a translation of a Sumerian tablet by the controversial Orientalist Alexander Sitchin, Icke describes the arrival of the Anunnaki in Africa for the purpose of mining gold. At first, the Anunnaki roped their own working classes into laboring in these mines, but later they developed humanity as a slave race through genetic engineering (6). While the original purpose of humanity's creation involved the exploitation of human labor, Icke argues that the Anunnaki have other, darker uses for human beings. Throughout The Biggest Secret, Icke points to the bloodiest and most difficult chapters in human history and blames each one on Anunnaki scheming. Human sacrifice? Demanded by reptilian overlords (38). British colonialism? Designed to wipe out indigenous knowledge and replace it with propaganda and mind-control (129).

The death of Princess Diana? A ritual sacrifice of a moon goddess who had criticized her husband's reptilian royal family (443). ...

Do my comments and sources constitute an "ad hominem" attack? - yep-yep. I have no problem with calling people vile names so long as they are backed by real facts, not misbegotten impressions of the sort "AdamS," who opened this discussion, brought to me. If the shoe fits ...

Since part one, "AdamS" has commented that my response is largely "guilt by association" - but anti-Semitism and Holocaust denial are not guilt by association. Neither is publishing in Neo-Nazi publications, something I'd never do in five million years. Spotlight? Exposure? That makes him one of them, not tangentially "associated" but in the Nazi camp. Only a rank amateur or "fellow traveller" would accuse me of "ad hominem" and "guilt by association" here. The Protocols of the Elders of Zion? Lizards from the fourth-dimension? How stupid does it have to get before his readers question this crap? What's next? The Protocols of Satanic, Jewish Gay Clowns from the Dog Star?

I'm an anti-nazi who exposes the Holocaust. My Birchite "shadow" is a neo-nazi who denies it. There is no common ground here, and anyone who calls Icke - as a publisher in Santa Barbara once did - "the British Alex Constantine," is a hopeless nutter. I once heard a 9/11 researcher interviewed on NPR refer to Icke as a "turd in the punchbowl." Drink at your own discretion, but know what you're swallowing.

To Alex Constantine, I tried to contact you by email many times but with no reply. I met Icke several years ago at a venue at Trinity College Dublin, I had already been in contact with him b y email for some time and the things he wrote in the emails were quite incredible, I believe I still have copies in my files. He told incredible things about Ireland which reeked of Irish mythology. Did he think I was a stupid Paddy? Well Im not and I was uneasy about Icke from around 2000 when he contacted me shortly after I put up my website in 1999, caklled "The Missing Persons Issue Ireland".
When I met Icke at Trinity, I spoke with him in the foyer and after he finished his show in the hall to the students of the college. He certainly was shocked when I turned up at Trinity and he wasnt glad to finally meet me!
My opinion on Icke is: his socalled info on shapeshifting and reptiles does discredit to genuine whistleblowers such as myself and AC and many others because it belittles much of his other info on satanism, which is basically true! You cannot convince the average guy if you include such ridiculous claims as reptiles and shapeshifting!
David Shaylors claims that Icke is a disinformation agent makes sense because a lot of Ickes info stems from Springmeyers books!
If AC would like to talk with a genuine victim/whistleblower he can contact me on my email!