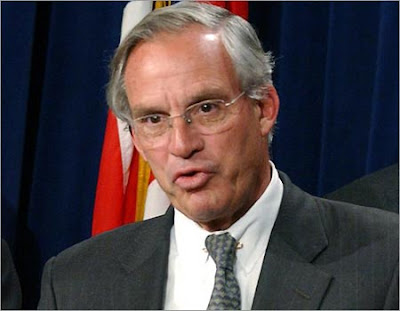 " ... Goss had reason to resent Harman: ... She aggressively pursued her own investigation of the case that felled U.S. Rep. Randy Cunningham (R-Calif.) in a cash for contracts scandal - one that also brought down Goss buddy ("Gossling") Kyle "Dusty" Foggo, Goss' number 3 at the CIA. And they weren't exactly best buds before that; Goss and Harman had clashed, for instance, on waterboarding; she went over his head and formally registered her opposition to the torture practice with the CIA. ... "

Why did Porter Goss target Jane Harman for investigation when his staffers apparently didn't think she was up to anything suspicious?

Hold on for a sec, and let me explain first that the New York Times has a development in the Harman-AIPAC staffers-classfied information-political favors saga tonight; someone in the camp of former Attorney General Alberto Gonzales is speaking, finally, and acknowledging that he put the kabosh - at least temporarily - on any investigation into Harman. (Just to make it clear - Jeff Stein at CQ, who owns this story and whose coverage has been superb, had this Sunday night, but the NYT seems to be the first to get Gonzales's folks to talk.)

According to this Gonzales-friendly account, he admits to protecting her as she was playing a useful role as a leading Democrat - the ranking member on the U.S. House of Representatives Intelligence Committee - who backed the Bush administration's efforts to expand its eavesdropping powers.

He's claiming his major reason, however, was to keep her from being forewarned that FBI agents would interrogate her in the matter.

This doesn't quite jibe, especially because he never reopened the case; either she was good value, or she was corrupt. Or maybe, in the Gonzales moral universe, the two are not mutually exclusive.

But there's even more fascinating stuff buried in the story: It looks as if the decision to target Harman was initiated by her old nemesis Goss, the Intel committee chairman who had gone on to the top CIA job.

Piecing this doozy together requires jumping from the lede in the NYT story, way way down. But look:

"WASHINGTON — The director of the Central Intelligence Agency concluded in late 2005 that a conversation picked up on a government wiretap was serious enough to require notifying Congressional leaders that Representative Jane Harman, Democrat of California, could become enmeshed in an investigation into Israeli influence in Washington, former government officials said Thursday."

"Former officials said that Mr. Goss had first seen the transcripts of Ms. Harman’s phone conversations in late 2005, when the government was renewing its requests to a special court to wiretap the calls of the Israeli operative, whom they would not identify. Ms. Harman was not the target of the eavesdropping but her conversations were picked up because she spoke with the Israeli agent."

Note the operative verbs: Lede: It was Goss who "concluded" that the tap required more action. He drew this conclusion not because Harman's alleged involvement was raised with him, but during a periodic review of material supposedly incriminating an entirely different person. Tenth graf: The review is when the transcripts were "first seen" by Goss. As in, no one had bothered to bring it to Goss' attention before. Maybe because it wasn't all that. ...

As I've pointed out before, Goss had reason to resent Harman: As ranking member on the committee, she aggressively pursued her own investigation of the case that felled U.S. Rep. Randy Cunningham (R-Calif.) in a cash for contracts scandal - one that also brought down Goss buddy ("Gossling") Kyle "Dusty" Foggo, Goss' number 3 at the CIA. And they weren't exactly best buds before that; Goss and Harman had clashed, for instance, on waterboarding; she went opver his head and formally registered her opposition to the torture practice with the CIA.

So: Motive; opportunity; crime? Not one committed by Harman. I'd like to know whether a CIA director would be liable for gaming the system against an enemy.

There's more: Former operatives are now telling CQ (where the story first broke) and the Times that when they informed Nancy Pelosi (then the minority leader, now the speaker of the house), it was not as part of a customary heads up to the House leadership about a member facing national security trouble; they just wanted her to know because they were pissed. Not only that, but they waited months - apparently this case was not so urgent.

This is not the behavior of dedicated law enforcement officials. These are vindictive brats. Notably, a number of "Gosslings" were people that Goss brought with him from the committee to the agency ... who would be in a position to be referred to in a newspaper story as "former national security officials."

I'm not counting out, by the way, that the other operating motive here is to cloud a Justice Department review of whether to go ahead with the Rosen-Weissman trial, just weeks before it is to start. Mutual interests have a way of coming together, and it could be that the some of the leakers are in both camps: Get Harman and get AIPAC.

The sequence of the leaks is telling: First, leak that Harman may have been implicated in this alleged Israeli spy network; then leak the details of the government's reconsideration of the case and voila! Officials reviewing the case must now contend with the prospect of being accused of covering up a scandal involving a lawmaker from the president's party.

Kudos to the Times, by the way, for finally getting some kind of sequence in order - although we still don't know when the actual alleged conversation between Harman and "Bob" took place. How frequent are these warrant reviews? Once a year? I'm not sure. A yearly review would place the conversation sometime between late 2004 and 2005 - consistent with the Times' earlier reporting.

Speaking of timing, I must confess to my own "bad." I have speculated that timing is critical, arguing that it would have been implausible for a conversation about dropping the case to take place after the indictment had come down (Aug. 4 2005); because prosecutors simply don't drop hard-won indictments. But as Jeff Stein at CQ reports, Harman is alleged to have been asked to seek leniency - and that's certainly likely, even after an indictment. There's no evidence she did so, by the way.

And speaking of why agreeing to commit a crime - but not committing it - might still be a crime (although it probably is not), read Zachary Roth at Talking Points Memo, who has been doing terrific explicatory work on this case.