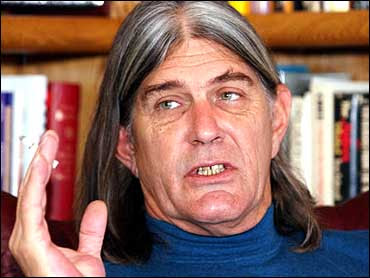 Churchill's courtroom comments on the introduction of smallpox-infected blankets to the Indians by the U.S. Army: "I've been hearing this all my life from traditional sources and mainstream sources. It's enshrined in songs and oral traditions specific to the Mandan." ... Churchill said he's attended several speaking engagements since the misconduct allegations arose and people are stunned when he tells them that he is accused of making up facts about smallpox being introduced by the Army, something he considers common knowledge. ... "
http://www.denverpost.com/commented/ci_11977426?source=commented-news

Churchill considers the smallpox blanket story to be "common knowledge" - yet resorted to inventing sources to document it, despite his sworn misstatements:

"... Churchill cited Evan S. Connell's Son of the Morning Star: Custer and the Little Big Horn and Russell Thornton’s American Indian Holocaust and Survival but neither book says anything about the army playing such a role. ... "
http://www.columbia.edu/~lnp3/mydocs/indian/ThomasBrown2.htm

Re: “Jury to have last word on Churchill’s suit vs. CU,” March 9 news story.
Denver Post

I am a retired teacher with a master’s degree in American studies focusing on outdoor museum management, more than 60 graduate hours, and many hours of study and experience as a volunteer at such sites as Bent’s Old Fort and Fort Laramie. Ward Churchill is an embarrassment to all who strive for accuracy and truth in Western American history.

For example, the canard regarding the distribution of smallpox-infected blankets to the Indians by the Army was refuted years ago, as Mr. Churchill should have known had he been an adequate student and researcher. Couldn’t he find a more original lie?

If Mr. Churchill wanted to make his mark, why didn’t he pursue the yet-to-be-written history of some of our forgotten Western citizens — women, the Hispanics who actually built Bent’s Old Fort, the Native Americans/Indians/First Americans (take your pick) who kept commerce flowing there, even Dick and Charlotte Green, William Bent’s slaves — instead of masking his arrogance and lack of scholarship in the guise of academic freedom?

PART SIX
Posted by Alex Constantine at 3:30 AM