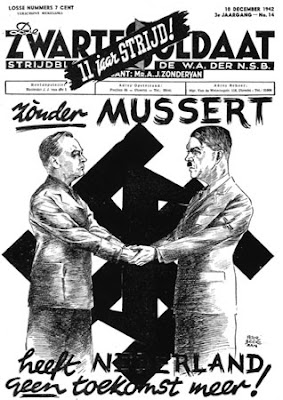 His public image was of an incorruptible and ascetic leader devoted to the fascist cause. But a recently-released research paper about Anton Mussert, Holland's chief Nazi collaborator, depicts a greedy man pocketing public funds.

Mussert, nicknamed "Holland's Quisling," was the de jure leader of the National Socialist Movement (NSB) in the Netherlands during the 1930s and 40s. Adolf Hitler declared him "Fuehrer of the Netherlands" after the Wehrmacht's 1940 invasion of Holland, though he enjoyed little actual power. He was executed for high treason in 1946 at the age of 52.

According to Dr. Tessel Pollmann, the historian who published the new research, Mussert, an engineer-turned-politician, was largely seen as "an honest man," a cut above the rest of the party's members. "Traditionally, Mussert was seen as the most decent man of the whole movement," she told Haaretz.

But the chapter entitled "Mussert the millionaire" in her research shows he stole about one million Florins. In 1940, this fortune would have given its owner buying power equivalent to five million euros. Most of the money was intended for Rotterdam's restoration after Nazi air raids, but went to Mussert's printing shop in Utrecht.

Asked why Mussert's wealth never became common knowledge, Pollmann says: "The issue hasn't been researched. Despite his thefts, Mussert was not a hedonist, which would have been seen in Dutch culture as uncivilized. He accumulated wealth but didn't show it."

Pollmann's research (available online at: www.tesselpollmannonderzoek.nl) shows that by the war's end, Mussert, who started off as a bourgeois civil servant, was the owner of five houses, a major printing company and director of a thriving publishing house. He also owned various precious antiques and a villa, all unrightfully taken from Jewish owners.

He allegedly bought out competing printing shops by buying up shares that belonged to Jews facing deportation. In 1939 Dutch Jews numbered about 140,000. Only 35,000 survived the Holocaust. Almost all were stripped of their possessions and shipped to concentration and death camps during the Nazi occupation. This was often done with help from Dutch volunteers, many of whom were NSB supporters.

According to Pollmann, who is not Jewish, about 5 to 10 percent of Mussert's illegally acquired possessions belonged to Jews. Mussert's own attitude to Jews has been the subject of some speculation. Many believe he was not anti-Semitic in earnest, basing themselves on the fact that in its early years Mussert's party boasted that its membership included hundreds of Jews.