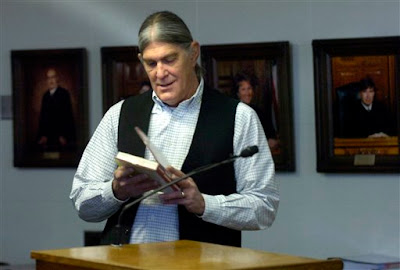 Under oath, in response to questioning by a defense attorney, Mr. Churchill testified that he wasn't interested in money, that he simply wanted his teaching job back.

And after the verdict was handed in, reports Boulder's Daily Camera, it was reported, "Ward didn't want this to be about money. ... Churchill said ... he's unfazed by the fact that jurors awarded him only $1 in damages after finding he was unlawfully fired by the university.

"That was a grand slam. I got everything I wanted from them," he said Friday. "I wasn't looking for money."

A few days later, however, he reversed himself and announced that he would be shaking CU down for the money that he testified he never desired:

BOULDER, Colo. — If a judge won't give Ward Churchill a job back at the University of Colorado, the former ethnic studies professor plans to ask for more than $1 million, he said Monday.

Churchill, who won a wrongful-termination lawsuit against the university last week, said he doesn't accept the contention that dissatisfaction with his presence on campus should prevent his reinstatement.

"If it would make a bunch of people uncomfortable on the Boulder campus, what's the argument?" Churchill said. "They violated my rights, therefore to spare them discomfort I should not be restored to what I was unlawfully deprived of? That's somewhat tenuous."

For those at CU who can't stand having him so close, Churchill has an offer:

"If it really makes you that uncomfortable, you're free to leave," he said. ...