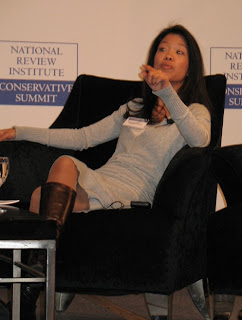 I'm sort of fascinated by the latest ACORN conspiracy theory, that ACORN activists are crashing right wing "tea parties" in order to sabotage them. I'm fascinated, because like Steve Benen, I don't know anyone who actually cares about these things. Obama's approval rating is in the 60s. The country is growing more optimistic about his presidency. I could see being concerned about the tea parties if they legitimately comprised some sort of mass movement centered around widespread public discontent with the president, but it just seems to be a bunch of sour grapes from hardcore conservatives who would hate Obama no matter what. The far right also seems to have a hard time mobilizing without an evil enemy, someone to hate.

So I was interested in finding out where the rumor started. It turns out, it started on somewhere on the Internet. I don't mean that someone reported ACORN activists showing up at a tea party and wrote about it on their blog, or that some local newspaper published a story to that effect, I literally mean it started on the Internet. Michelle Malkin linked to this post on a conservative blog, which linked to this post on an online tea party Internet forum. Meanwhile, Malkin has been twittering about this for days, hyping the ACORN/Kos/Obama conspiracy axis. All because someone wrote something on the Internet. I believe this policy can be explained as "trust, but don't verify."

In any case, on the off hand possibility that there was some truth to the idea that ACORN was orchestrating the sabotage of tea party gatherings, (maybe some local chapter had organized a counter-protest or something) I called up ACORN Executive Director Steve Kest and asked him about it. "I saw some mention of this on a blog, I have no idea even what the tea parties are," Kest said. He then asked me to explain to him what the tea parties were having only just heard about them yesterday. When I laughed, Kest said, "Seriously, do you know more about what the deal is here?"

Naturally, ACORN being completely unaware of the tea parties is just more proof that they've conspired to destroy them.