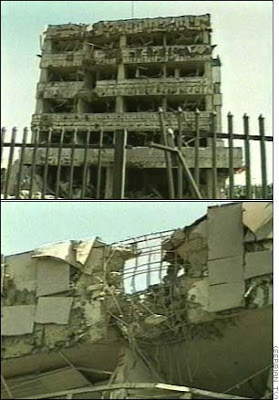 Detritus left by the May 1999 NATO bombing of the Chinese embassy in Belgrade.

Video: "On the Record: Jim Plowman Addresses Murder in Lansdowne" - "In an exclusive video interview with Jim Plowman, the Loudoun Independent asks the Commonwealth’s Attorney about the tragic murder of William Bennett and the brutal beating of his wife, Cynthia last Sunday morning in the Lansdowne area. A rattled community is left with more questions than answers. Here, Plowman attempts to answer a few of those remaining questions."

Slain Lansdowne resident William Bennett was connected with the Central Intelligence Agency (CIA) following his military service. In a conversation with the Loudoun Independent, the CIA's George Little confirmed that Bennett worked as a contractor for that agency for several years. His service to the company ended in the year 2000.

It has been reported by NBC Washington that Bennett was involved in the May 1999 NATO bombing of the Chinese embassy in Belgrade during NATO involvement in Yugoslavia. Three Chinese citizens were killed in the attack.

This accidental bombing was later blamed on an outdated map that showed the embassy at its prior location. The CIA later took responsibility for the error, firing one officer and reprimanding 20 more. It is unclear at this time the level of Bennett’s involvement and whether or not it might be linked to the deadly attack that took his life.

The Sheriff's Office continues to investigate the murder of William Bennett and the assault on his wife, Cynthia Bennett. They are receiving assistance from several organizations in the investigation.

http://www.loudouni.com/news/breaking-news/2009-03-26/lansdowne-murder-connects-1999-cia-bombing
Posted by Alex Constantine at 7:00 AM