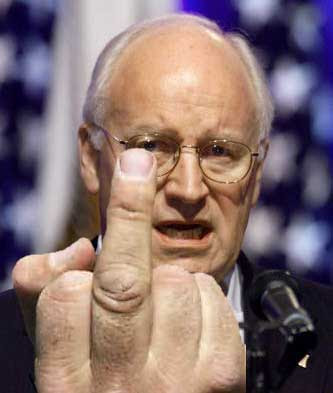 Former Vice President Cheney used to claim that he constituted a peculiar fourth branch of government unto himself, claiming executive privilege as part of the executive branch, while with the next breath refusing to obey executive branch record-keeping laws.

We are beginning to find out that former Vice President Cheney actually was operating a fourth branch of government: his own private, worldwide assassination ring. I don't recall the U.S. Constitution providing for such a fourth, co-equal branch of our government in charge of assassination rings.

Yet according to Seymour Hersh, a most reliable source, that is exactly what took place. Cheney was running his own personal assassination squad, reporting directly to himself.

I wonder what the criteria were for being on Cheney's "Hit List." Is there no level of treason outrageous enough to get one of the other two branches of government to confront these crimes against the Constitution?

The Justice Department must immediately appoint a special prosecutor. Failing that, Congress must show some courage, which has been extremely lacking the last eight years, and launch its own investigation to get to the bottom of this.

http://www.mlive.com/opinion/ann-arbor/index.ssf/2009/03/letter_name_a_prosecutor_to_pr.html
Posted by Alex Constantine at 1:59 AM