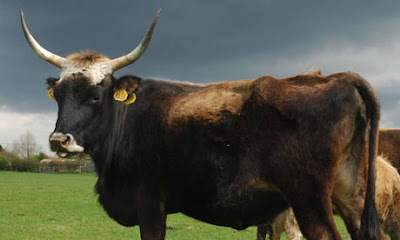 Their meat will not be reaching the Sunday lunch table any time soon and nobody would dare get close enough to try to milk them. But a herd of "super cows" descended from animals bred in Nazi Germany is making an impressive sight on a farm in the south-west of England.

The "Heck" cattle were designed by brothers Heinz and Lutz Heck in an attempt to recreate the extinct European wild ox, the aurochs, an important beast in German mythology.

Only a few survived after the second world war, but farmer and conservationist Derek Gow has imported 13 of the animals from Belgium to Broadwoodwidger, on the Devon-Cornwall border, where they have joined a growing collection of beavers, polecats and water voles.

Rather than allowing his Heck cattle to be hunted, as some of the Nazi leaders wanted to do, Gow will be offering photographers the chance to take pictures of the animals.

He also hopes to begin his own breeding programme because he believes the Heck cattle may one day have an important conservation role to play, taking the place of the aurochs in the cycle of life.

Gow said his Heck cattle were much shorter than the aurochs but they did retain the muscular build, deep brown complexion and shaggy, coffee-coloured fringe.

Only one of his herd was dangerous. "I'm standing 2ft away from her at the moment. If I was any closer she'd try to kill me. The others are just a bit nervous and jumpy."

Gow is also a champion of the reintroduction of the beaver to the UK, believing its loss has changed the shape of the British countryside for the worse. One of his beavers, which escaped from his farm at the end of last year, still remains on the loose.