By the Staff of The Blog of Legal Times
www.nylj.com 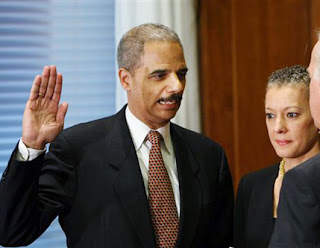 WASHINGTON - Attorney General Eric Holder Jr. has decided not to file criminal charges against a former Justice Department official who Senate leaders have said lied to Congress while under oath.

Bradley Schlozman, who served as the top official in Justice's Civil Rights Division under President George W. Bush, has been accused of lying to members of the Senate Judiciary Committee in 2007 while testifying as part of the investigation into the U.S. attorney firings of 2006.

According to a report issued by the Office of the Inspector General and the Office of Professional Responsibility, Schlozman falsely testified that he did not factor politics into his hiring decisions.

In a letter to Sen. Charles Schumer, D-N.Y., Ronald Weich, assistant attorney general in the Office of Legislative Affairs, said Holder will not pursue criminal charges. The U.S. Attorney's Office for the District of Columbia declined to prosecute Schlozman in January. Schumer, who questioned Schlozman at the original hearing, had called on Holder to re-examine the case.

Weich says in the letter that Holder was “disturbed and dismayed” by Schlozman's actions, but came to his decision after an extensive review of the matter.

Schlozman resigned from the Justice Department in 2007 and is now of counsel in Hinkle Elkouri's Wichita, Kan., office.

His lawyer, William Jordan, a partner in Alston & Bird's Atlanta office, said in a statement, “Brad is extremely pleased that he has been fully exonerated by this review. The Attorney General made the right decision. … [T]he IG issued a grossly inaccurate and biased report … [and] … flatly refused to include in his report any of the information Brad provided that demonstrated clearly that he did not make hiring decisions based upon political affiliation.”