"Op Ed," who acknowledges that he "hates" me, posting at Rigorous Intuition, writes:

"It is a further demonstration of AC's uselessness that he manages not to even pick an article actually written by Icke... " 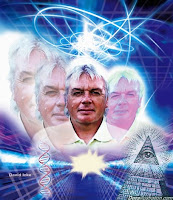 The author of this false and mentally-lazy critique (I quoted David Icke verbatim in the post, from a chapter in "The Robot's Rebellion," if my condescending detractor bothers to read actual words on the page) clearly needs glasses or basic reading lessons, and can't write a single true sentence ... but faults me for something I didn't do ... to arrive at the conclusion that I'm "useless."

Funny, but the London Observer didn't seem to think so when I was credited with having published one of "the best 50 books on music ever written. ... " And the many tumors I've warded off by writing in Hustler and elsewhere about the biological hazards of dust rDNA-based aspartame actually moved some who've healed from terminal illness to thank "useless" ol' me. Imagine that. What do they know? And the sister of Michael Hutchence didn't think I was completely useless when I explained to her how her brother was murdered. And the fans of Jimi Hendrix don't think so after I explained how the virtuoso died - confirmed nine years later by a Hendrix roadie ... and keyboardist Ray Manzarek didn't think so when he loudly defended my work, and even hugged me off-camera at the taping of a TV show about the death of Jim Morrison ... but why go on?

I won't even explain the many death threats, physical assaults, frivolous lawsuits, or even the immense sacrifices that I've made fighting for Mr. "Op Ed"'s rights. There are some in the world, hard to believe, who don't consider me altogether useless.

Okay. Why?: I've written about satanic cults. An acquaintance of "Op Ed" informs us:

"OP ED, at least what I know of him from what he presents at Rigorous Intuition, is a hardcore Thelemite (not sure what organized faction he works with) who goes to Halloween parties with Satanists. He loves to fuck with the minds of survivors and to undermine ritual abuse narratives. Besides which, he's proud of his regular consumption of mind-altering phramaceuticals, which may explain how he spends long, long hours schmoozing up the denizens of that board."

"Pharmaceuticals?" What does Mr. "Op Ed" do for a living, btw? Why, he's a skilled, highly-trained janitor - and may actually be more useful sweeping floors than he is with reading and comprehension. I'd much rather debate the issue with the proverbial dining room table, though, because a piece of furniture has to be smarter than this tool from the Motor City ...

There. Now I've given this rectal wart a good reason to "hate." All in a day's work.

PS: A word about those comparisons with Mae Brussell I've seen on the web - I'm actually much MEANER than Mae, to correct the record. Anyone who thinks me a gentle pacifist who takes verbal abuse, as Mae did, is sadly mistaken. The next troll who thinks that I'm an easy target should consider the 3,000 readers a day who drift my way. All those readers will go away knowing who the idiot trolls are, and that warms my hackles, or cackles (whatever they are ... ).
Posted by Alex Constantine at 9:52 AM