The Untold Story of SAIC, Network Solutions, and the Rise of the Web—Part 1

Even when the Internet boom was happening—even during the incandescent gold rush years of the late 1990s—Network Solutions was not exactly a household corporate name. Not compared to the first wave of companies like America Online or Netscape Communications, whose Aug. 9, 1995, IPO seems to be the demarcation line between everything that existed before the Internet and everything that came after.

Even to those who had heard of Network Solutions, the little company in Herndon, VA, that held exclusive rights to register Internet domain names was something of a mystery. Just how did that government-issued monopoly come about, anyway? And then there was SAIC, the San Diego-based government contractor that had acquired Network Solutions in March 1995. SAIC was an even bigger enigma, because so much of its work involved specialized and classified research and engineering services for the Pentagon and U.S. intelligence agencies. Even on projects that don’t involve secret DoD programs, SAIC doesn’t go out of its way to attract attention.

So it’s not widely known, for example, that SAIC acquired Network Solutions for only $4.7 million, and operated the company during a five-year period of near-exponential growth. Network Solutions was managing only about 60,000 Internet domain names when SAIC took over, but during those crucial early years the company built out the infrastructure needed to manage millions of domain names. At the same time, SAIC sold off pieces of its stake in the Virginia company—eventually realizing billions of dollars in increased valuation. 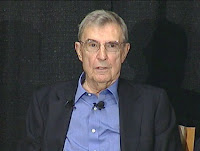 I got a rare opportunity to gain new insight on this story from two key insiders: SAIC founder (and Xconomist) J. Robert Beyster, who was SAIC’s chairman and CEO during the Network Solutions years, and Mike Daniels, the SAIC executive who led the acquisition and served as chairman of Network Solution’s board during the years SAIC controlled the company.

They tell me they became friends in 1986, after SAIC acquired Daniels’ company, Computer Systems Management. It was a small government contractor in Northern Virginia that had worked on sensitive IT projects for the Reagan Administration, such as an upgrade in the National Security Council’s crisis management decision-making system.

Daniels says he had a front-row seat on the Internet from its very beginning in 1969, when he was a young naval officer assigned to the Office of Naval Research in Washington D.C. “They assigned me to ARPA,” Daniels tells me, referring to the Pentagon skunk works known as the Advanced Research Projects Agency. “It just so happened that the ARPANET was started a few doors down the hall from my office.” This progenitor to the Internet was an experimental computer network, established with the idea of sharing computer resources and connecting communities throughout the country at places like Harvard, MIT, USC, Michigan, and Northwestern. “So for the next two years,” Daniels says, “I was one of the first users of the ARPANET.”

Daniels says he enrolled in law school after he got out of the Navy, and worked for a number of years at CACI, an IT company in Arlington, VA, before leaving in 1979 to start Computer Systems Management. He says his interests turned back to the Internet after he had sold the company and was working for Beyster at SAIC. He had continued to follow the development of the ARPANET after the defense-oriented MILNET was split off in 1983, and the remaining non-military operations were turned over to the National Science Foundation (NSF).

He says he was introduced in 1987 to the four owners of Network Solutions, a computer networking specialist that had been qualified as a minority-owned government contractor. “I basically got to know them over the next five or six years,” Daniels says. “They had networking contracts with Nations Bank, [based in Charlotte, NC]. They had a networking contract with the state of Pennsylvania… They had a small group of networking guys who were really smart.”

Meanwhile, at SAIC, Daniels began working closely with Beyster and other senior executives as the San Diego defense conglomerate went on something of an acquisition binge—targeting small IT companies and government contractors. From 1990 through 1995, SAIC was acquiring six to nine such companies a year.

In 1992, the NSF sought competitive bids for a private contractor to register and manage Internet domain names under a “cooperative agreement.” The foundation selected Network Solutions Inc (NSI), which was among just five bidders that responded to the NSF solicitation. Daniels recalls: “It was a $1.5 million fixed-price contract for NSI to run the Internet domain name business. They had no idea—none of us did—what was going to happen with domain names in the next three years.”

Yet Daniels says he sensed something big was about to happen. He says he had seen Steve Case, who was one of his friends in Northern Virginia’s technology community, turn a company in Arlington called Quantum Computer Services into America Online. He began making regular business trips to meet with other technology leaders in Silicon Valley. “I just had the sense that these guys in Silicon Valley were going to push into the Internet,” Daniels says.

At SAIC, Daniels continued to meet with Emmit McHenry, Network Solutions’ president and CEO, and sought to acquire the little company based in Herndon, VA, on behalf of SAIC. “I probably made five or six offers from ‘94 to March of ”95, when they finally agreed,” Daniels recalls. “So we bought Network Solutions. The idea was to build up the networking business they got, build up their networking technology capabilities in government contracting, and then I was going to take a look at this domain name business they had.”

The timing of SAIC’s buyout was lucky indeed. As Daniels puts it, “Nobody really understood that NSI basically had an exclusive contract to sell dot-com, dot-net, and dot-org to every human being on the planet… But people just didn’t see it. They just didn’t understand what the potential was.”

On the other hand, Daniels says, “If we had not come in and purchased Network Solutions, nobody knows what would have happened.” The orders for Internet domain names that began flooding in during the Internet boom years “required financial, technical, and management capability that they did not have.”