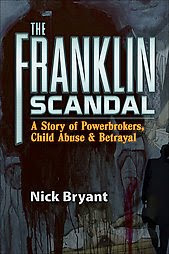 A nationwide pedophile ring, run by a pair of Republican powerbrokers, had access to the highest levels of our government, connections to the CIA, and used venerable Boys Town orphanage as a pedophilic reservoir.

Nick Bryant´s writing has recurrently focused on the plight of disadvantaged children in the United States, and he´s been published in numerous national journals, including the Journal of Professional Ethics, Journal of Applied Developmental Psychology, Journal of Social Distress and Homelessness, Journal of Health Care for the Poor and Underserved, and Journal of School Health.

The Franklin Scandal : a new documentary and book on the Franklin Cover-up by Nick Bryant:

http://www.franklinscandal.com
Posted by Alex Constantine at 9:54 AM