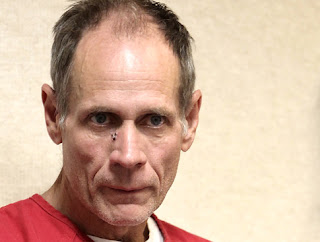 WALNUT CREEK — A Concord man who says he knew Phillip Garrido well for 15 years and met Jaycee Dugard and their two girls played a pair of CDs for the Times on Thursday containing suggestive rock songs and trippy synthetic ballads he says Garrido recorded and gave to him about three years ago.

The discs contain about 20 songs, with lyrics that seem to reflect Garrido's now infamous history in prison for the kidnapping and rape of a woman in 1976, and perhaps the abduction and sexual assault of Jaycee Dugard.

"Leavenworth's a long long way from Nashville/ Here I go, tra-la-la/But I get my jollies in a motorcar, feelin' good," a man sings in one song.

Garrido's occupation is listed as "musician" on the Reno police report from the crime, in which he hitched a ride from a Harrah's casino worker, bound her and drove across state lines to rape her in a storage shed. He served most of the 11-years he spent in prison in federal penitentiary in Leavenworth, Kan. Three years after his release in 1988, 11-year-old Jaycee was swiped from her South Lake Tahoe street on the way to the school bus.

"The way she walks, yeah, subtly sexy/What can I do? I fall victim too/A little child, yeah, look what you do."

Marc Lister, who ran a glass shop in Antioch, said he plans to turn the CDs over to law enforcement if they want it, but he also hopes somehow to raise money from it for abused women or children. He said Garrido gave him the discs in 2006. Lister said he dug out the music from his storage room after Garrido and his wife, Nancy, were arrested last week and charged in Dugard's 1991 abduction and a years-long series of rapes at the couple's home in unincorporated Antioch.

"I think there's some sort of a message here. I think it's disturbing. I'm surprised he wrote lyrics about some of the things in here, whether for the girls or his own mental outlet," said Lister. "It's a little bit twisted. It's not right."

Another customer of Garrido, Antioch realtor Deepal Karunaratne told the Times last week that Garrido let him listen to music he said was recorded in a soundproofed studio in his backyard. Karunaratne said Garrido never gave him the music to keep.

"He came to my house to deliver stuff, wearing a Walkman and headphones. He put the headphones on my ears," said Karunaratne. "He's a very good singer."

Lister said he thought Garrido somehow recorded the music in prison. Garrido was last behind bars on a 1993 parole violation, when he served 38 days in custody. That was two years after Jaycee went missing from a Concord street.

"Mother in your eyes, deepness in your pride/played well when I first met 'ya/Saved from the days, I kept saving you, but in the darkness you remain/Everybody pays in the human race/Being abused and used as devices."

Lister said he had two musician friends transcribe the lyrics over two days. At the office of his lawyer, Mark Mittelman, he let the Times hear extended portions of several songs, which he says feature Garrido singing and playing bass guitar. He declined, however, to provide a copy of the CDs, which feature a cover [with the title] "Voices are Real," similat to one on a different disc of written ramblings
that another of Garrido's customers previously gave the Times.

"I want to make sure anything on these tapes is not going to jeopardize Jaycee's recovery," he said in explaining why he did not allow a full copy of the discs. "I'm not trying to sell anything."

He said he often went to the Garridos' Walnut Avenue home to pick up printing work and sometimes went inside. He met Jaycee and also saw her in the car with Garrido outside of the house.. Lister said Garrido never identified the woman with the bright blue eyes as either his daughter or wife, and that he never asked.

"I will tell you about the only one/She's a dream, dream come true/With a note saying you're my baby blue."

Garrido grew increasingly strange over the years, Lister said, and would show him the black box through which he said he could hear the voices of angels, claiming special powers.

"That's when I knew it was time to stay away from Phil," he said. "Phil acted strange once in awhile but it wasn't a perverted strange. It was, he didn't have all oars in the water."

Garrido told him the songs "will be heard around the world someday, which I thought was a non-statement," Lister said. The dark irony isn't lost on Lister, with a swarm of international media around the stunning discovery of Dugard and the two blond girls she had by Garrido.

"For every little girl in the world/They want to be in love, yeah/You're just the same, go play a game/Just tell me that you want me."

But Lister thinks that Garrido was frustrated at the difficulty in spreading his peculiar religious message and ready to come out to the world and explain his self-described transformation. In short, he may have invited his arrest, Lister suggested.

"I think he was trying to get people to listen to him."