“[I] Pray For Barack Obama To Die And Go To Hell”: The Story the Media Missed 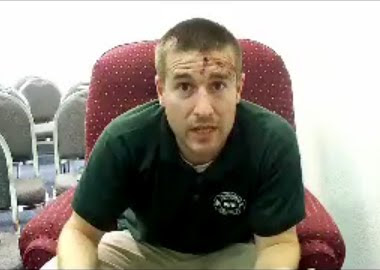 When an Arizona man brought guns to an Obama speech the story went unnoticed by a media prone to seeing such people as lone nuts. A look at the sermons of his virulently anti-gay pastor who’s been praying for Obama’s death, however, reveals similarities to a far right theology associated with militias, radical prolifers, and proponents of theocracy.

Pastor Steven L. Anderson explaining why it's good to carry a gun

Chris Broughton, 28, made national news when he showed up to protest a speech by President Barack Obama in Phoenix, Arizona with an AR-15 automatic rifle slung over his shoulder and a handgun. While Broughton claims that his (apparently legal) actions were not meant to threaten the president, there was more to the story than a single citizen’s dubious actions and pronouncements. Local print and television coverage in Phoenix, and bloggers all over the country, have led the way on an interesting and important story of religion and politics that has been almost entirely ignored by the traditional media.

Here is what they missed.

The night before Broughton’s fifteen minutes of fame, he attended a fiery Sunday sermon by his pastor, Rev. Steven L. Anderson, at Faithful Word Baptist Church in Tempe, Arizona. Rev. Anderson, also 28, explained not only “Why I Hate Barack Obama,” but also why he and God both want the president dead. “When I go to bed tonight,” Broughton’s pastor declared, “Steven L. Anderson is going to pray for Barack Obama to die and go to hell.” He even goes so far as to claim that:

"God appointed [Obama] to destroy this country for the wickedness of the United States of America. God appointed him because that’s what our country has turned into. That’s who we deserve as a president."

And yet, even though we may deserve Obama, Anderson urges his congregation to pray for the president’s death, issuing imprecatory prayers and repeatedly asking God to kill the president. Most dramatically, and in an interesting shift to the passive voice, he said Obama “ought to be aborted” because the president is pro-choice, and therefore a “murderer.” Despite all this, Anderson has insisted to reporters that he was not calling for vigilante violence. Ditto for Broughton, who told a reporter for the Phoenix New Times: “I don’t care how God does it, I’m not going into further detail than that,” said Broughton. “It would be better now than later.”

“However it happens, I’m going be happy that it happens,” he continued. “I’m gonna be a happy man… I would rejoice.”

While our national media and political culture often succumb to the temptation to classify people who take extreme political acts, particularly of violence, as lone nuts, in fact such people are not necessarily either nuts or alone. Even when acting individually (as Chris Broughton did when he brought an automatic weapon to an Obama speech), they are frequently operating out of a particular religious, cultural, and political context. Absent the distraction of a horrific crime, the story of Chris Broughton and Steven L. Anderson provide a perfect example. In fact, Broughton had discussed his act in advance with Anderson, who praised him afterwards, writing “Good job, Chris!”

At a teabagger rally in Arizona, Anderson denounced both the Republican and Democratic Parties, declaring without a hint of irony that Obama, the “worst president” in American history, is “selling us into slavery and serfdom.” Further research revealed Anderson’s involvement in the Constitution Party, the third largest “third party” in the United States. In a June speech to the state convention of the Arizona Constitution Party, he introduced himself (in addition to being pastor of a church) as the owner of a “firearms business” operating in “several states” and closed with a plea for an American government based on God’s laws as set out in the biblical book of Deuteronomy.

The Constitution Party (which has tended to be the political home for people with views strikingly similar to Anderson’s) is frequently dismissed as a fringe party of little electoral consequence, even though its significance lies elsewhere. It is in fact a steaming hotbed of far-right factions with theocratic, vigilante, and sometimes revolutionary ideas whose like-minded members get together to make their plans, just like any other organized faction in American public life. The party says it is 100% pro-life and pro-gun.

Many of the party’s early leaders were Christian Reconstructionists, or were heavily influenced by Reconstructionism, including party founder and three-time presidential candidate Howard Phillips. Reconstructionism is a theocratic systematic theology whose seminal thinker, the late R.J. Rushdoony, spoke at the Constitution Party’s founding convention and was a longtime advisor to Phillips. Reconstructionism was one of the significant theological catalysts for the modern religious right; a movement, like other social and political movements throughout history, that has transcended party identification.

The Constitution Party has also been a political home to a wide array of militia proponents, including one of the movement’s leading theorists, Larry Pratt head of Gun Owners of America; Rev. Matthew Trewhella, founder of Missionaries to the Preborn (who has urged parents to buy each of their children “an SKS rifle and 500 rounds of ammunition” for their church militia); Operation Rescue founder Randall Terry (who ran as a Constitution Party candidate for Congress in 1998, but who has since become a Republican); and even Rev. Michael Bray, a convicted felon and longtime leader in the Army of God.

… you’re going to tell me that I’m supposed to pray for the socialist devil, murderer, infanticide, who wants to see young children and he wants to see babies killed through abortion and partial-birth abortion and all these different things—you’re gonna tell me I’m supposed to pray for God to give him a good lunch tomorrow while he’s in Phoenix, Arizona? Nope. I’m not gonna pray for his good. I’m going to pray that he dies and goes to hell.

But no one should come away from this story without a sense of the depth and breadth and virulence of the views being expressed or that Anderson sees his views as anything other than the truth and an effort at common sense. Fortunately, diligent bloggers have been on the case, notably TPM Muckraker, Crooks and Liars’ Dave Neiwert, Pam Spaulding, PFAW’s Right Wing Watch, and the excellent reporting of the Phoenix New Times.

Interestingly, nationally syndicated liberal radio talk show host Alan Colmes conducted a particularly penetrating interview. When Colmes asked Anderson what his response would be if someone killed Barack Obama in response to his sermon, he replied: “I wouldn’t cry about it.”

Colmes said to Anderson: “You want the president dead…”

“Absolutely,” Anderson agreed. “Now that doesn’t mean I’m gonna kill him. But you know what? I believe he should reap what he’s sown.”

“[Obama] deserves to die, because he’s a murderer.”

“I’m not going to take responsibility for other people’s actions,” said Anderson. “You know, it’s ridiculous how I’m supposed to be held accountable for what anyone who listens to my sermons does.”

In fairness, Anderson says he also thinks that George W. Bush and Dick Cheney also deserve to die for their alleged crimes of torture and the deaths of a million Iraqis in a war he opposes. But lest anyone think that such views betray a kind of moderation, his views on homosexuality, which may one day make him a contender for the mantle currently held by the infamous Rev. Fred Phelps, will probably check any such temptation:

“[E]very good king of Israel,” he claims, either “got rid of” or “exterminated... the sodomites…”

He rhetorically asks “how do we stop it?” remarking only that “they have no natural predators,” leaving it to the imagination of the listener as to what might be done. He is an artful demagogue who seems to be well aware of the line between wishing homosexuals and the president to be murdered, and directly calling on anyone to act.

In the course of another sermon he angrily denounces the United Methodist Church because, as he puts it, “ten percent of their preachers are queers”:

“I’ll stand behind the pulpit call them the fag that he is. I am here to preach the Bible.”

Anderson’s anger is hair-raising as he shouts: “I am not going to stand by… and let faggots run the church! It’s bad enough that we’ve got a bunch of faggots running the government!”

It might be tempting to dismiss Anderson as the meaningless leader of a small congregation whose post-controversy service drew, by his own account, only forty-nine. But he says such extraordinary things all the time—as his effective and demagogic appearances at teabagger rallies and other venues of the far right have shown—and it doesn’t take large numbers of people, acting singly or in cell groups, to commit horrific acts of violence in God’s name.

Virulent ideas, and a will and a capacity to carry them out, are all that matter. We have seen many such cases in recent years in which at some point, actions meet the demands of the words of leaders with particular ideas about what God may require.

http://www.religiondispatches.org/archive/religiousright/1801/%22%5Bi%5D_pray_for_barack_obama_to_die_and_go_to_hell%E2%80%9D:_the_story_the_media_missed_?page=entire
Posted by Alex Constantine at 7:40 AM