" Across the country, federal health officials say, only about 42 percent of all health care workers get an annual flu shot. ... That’s why the emergency regulation adopted this summer by the State Health Department making all hospital, home health and hospice workers get seasonal and swine flu vaccinations was a startling and radical step. ... " 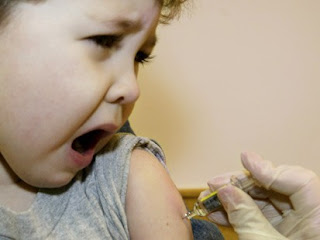 When she cleans the rooms of patients with swine flu symptoms, Jana Newton, a housekeeper at Maimonides Medical Center in Brooklyn, has to suit up for her own protection in a mask, gloves, gown and hairnet.

Jana Newton, an aide at Maimonides Medical Center in Brooklyn, said she has not been sick and sees no reason for a shot. But she still does not want the one thing that would give her a far better defense — a flu shot.

“Some people’s immune system is good, like me,” Ms. Newton said. “I’ve been here five years and never been sick. Why mess with something that’s not broken?”

She is not alone. Across the country, federal health officials say, only about 42 percent of all health care workers get an annual flu shot. That is little better than the overall national average of 33 percent and far below the 65 to 70 percent rate for the elderly.

That’s why the emergency regulation adopted this summer by the State Health Department making all hospital, home health and hospice workers get seasonal and swine flu vaccinations was a startling and radical step.

No other state or city health department has such a rule. Local unions reacted angrily, saying they had not been consulted.

Joel Shufro, executive director of the New York Committee for Occupational Safety and Health, a coalition of 200 union locals, said the change was presented to them “as a done deal” on Aug. 17. His coalition is still debating suing to stop it, he said.

The unions do not oppose vaccination “but we oppose a mandatory program,” he said. “This is: ‘You don’t get the shot, you’re fired.’ ”

Some prominent health experts, however, were delighted.

She had pushed for years for mandatory vaccinations — not just to protect health care workers, she explained, but to protect their patients, who are often aged, have weakened immune systems or are bedridden after surgery, which increases pneumonia risks.

“We tried to market the idea, to push people, to educate,” she said. “But looking back, broadly speaking, we failed. It’s time to look at a more aggressive approach.”

By contrast, her successor, Dr. Thomas R. Frieden, said last month that even though he expected a surge in swine flu deaths this winter and even though C.D.C. guidelines give health care workers first priority for the new vaccine, he would not push to make vaccinations mandatory.

“This is just not the right flu season to take this on,” said Dr. Frieden, who previously was the New York City health commissioner.

C.D.C. experts said there was just too much confusion this year, with the logistical difficulties of getting both seasonal and swine flu vaccinations to workers and the fact that the swine flu vaccine is still being tested, to risk a fight over the issue now.

On Friday, federal health officials said more than three million doses of swine flu vaccine would be available by the first week of October. But they also reported “widespread” swine flu activity in 21 states, with summer not even over.

Every state already requires health workers to be immunized against measles, mumps and polio, and the unions do not object. Also, federal law requires their employers to offer free hepatitis shots against needle-stick injuries, and California requires them to offer free flu shots too. While workers may decline, they must sign a form saying they accept the risk.

Immunologists generally agree that real protection against any disease requires vaccination rates over 90 percent. But because rumors always circulate and many people fear needles, voluntary acceptance never gets that high.

Only two hospital groups in the country, Virginia Mason in Seattle and BJC HealthCare in St. Louis, now make all their employees get flu shots or face dismissal, said Dr. Thomas R. Talbot, an epidemiologist at Vanderbilt University School of Medicine who studies the issue. Both groups reached vaccination rates of more than 98 percent and he knew of five more planning to follow suit, he said.

Many hospitals make voluntary vaccination easier by using roving “shot carts,” drive-up shots and rewards like time off or a raffle for a Caribbean vacation. Tom Lowe, occupational health representative for the New York State Nurses Association, said he had heard some had reached 80 percent that way, though he could not name any.

Dr. Talbot said that, of the handful of hospitals he knew of that achieved more than 75 percent voluntarily, some used measures that were not entirely voluntary — workers who refuse must wear masks at all times or are told notes will be put in their personnel files.

With volunteers, “the best you can get is usually 50 to 60 percent,” said Dr. William Schaffner, president-elect of the National Foundation for Infectious Diseases and a longtime proponent of mandatory shots.

Complying with the new state rule, the New York City Health and Hospitals Corporation, which runs the city’s public hospitals, announced on Aug. 28 that seasonal and swine flu vaccinations would now be mandatory for all its workers. The corporation already requires an annual tuberculosis test, as well as evidence of measles and rubella vaccinations. Its previous flu shot program, which was voluntary, reached only 51 percent of workers last flu season.

Flu shots and attitudes toward them have changed slowly. The shots were invented in 1942 by the military, but became widespread only in the 1990s after Medicare began paying for them.

They have also been “cleaned up” as viral parts replaced whole killed virus, and filtering to remove stray proteins from the eggs they are grown in improved.

“Older health care workers remember the days when it gave you a sore arm and made you feel crummy,” Dr. Schaffner said of the shot. “That’s why some avoid it.”

Also, although the original intent was to protect the recipient and cut down on absenteeism, it slowly became clear that in hospitals, fewer flus in doctors and nurses meant fewer dead patients.

“I was an epidemiologist at San Francisco General in the early 1990s,” Dr. Gerberding said. “Among bone marrow transplant patients and others who were profoundly immune-suppressed, outbreaks of flu and other viruses could be very deadly. That changed the paradigm.”

Still, many workers dislike them.

Anthony Montero, 55, a dietary aide at Lutheran Augustana Center for Extended Care and Rehabilitation in Brooklyn, said he was afraid of needles, but added: “If it’s a must, it’s a must.”

Patrind Rungreang, 45, an X-ray technician at New York Methodist Hospital in Brooklyn, said he had no problem with being vaccinated if it was mandatory. But he felt the fear of swine flu was overblown.

“It’s just another flu,” he said. “We deal with all kinds of diseases here.”

Many poorly educated workers still believe flu shots cause flu, Dr. Schaffner said. Though that is impossible, because it is only parts of a dead virus, the myth persists and is reinforced every time someone gets a shot and then catches a cold, which it does not prevent.

This year’s rushed testing has added to fears.

Surveys of 8,500 Hong Kong health-care workers published last month in BMJ, formerly The British Medical Journal, found that more than half planned to refuse the new vaccine if they could.

The unions also object because no flu shot protects perfectly. As the virus mutates, new vaccines must be made each year, and in some years, like 2005, the flu mutates so quickly “that it’s really a crapshoot in terms of matching the strain,” said Jan S. Rodolfo, a nurse and a flu expert at the California Nurses Association, which represents 86,000 nurses in several states.

Over all, virologists say, of every 100 people who faithfully get flu shots, only about 70 are fully protected every year. But even the other 30 are partly protected by previous shots and by “herd immunity” — the fewer unprotected victims a virus finds, the faster it fades out.

David Welch, a cardiac unit nurse in Chico, Calif., who blogs about health issues for the California Nurses Association, said he got injected to protect himself and his patients, “but I want to defend the rights of other people not to get it. It’s not an easy choice.”

Sign in to RecommendMore Articles in New York Region » A version of this article appeared in print on September 21, 2009, on page A18 of the New York edition.