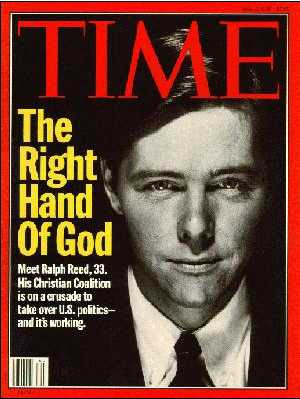 ... There was this bubba from Georgia named Ralph Reed, Jr. Well, he headed up the Republican Party for that state, and loved the Lord. He even headed up the Christian Coalition of true believers. He didn't like enemy folks none and said he'd put 'em in body bags and then he would sneak around in the dark to find 'em if he had to. Then I guess he just wrapped them up in the bags real tight.

Somebody said he used yard bags. He wanted to be the Governor's second hand man, and then he lost out when folks down there found out he was sly.

Ended up we found out later, Mister Abramoff was tied in to all those folks in California, one's in prison now connected somehow to Goss the CIA boss, and his buddies with rich businesses. See, they had some kinda buddy system where they all got jobs and contracts for big time money from the government because they knew the right folks. Then they all spread the money round to all their friends and family members got all kinds of jobs and things all over Washington DC. Money all over the place.

Then Ralph Reed headed up the Republican group in Georgia and a couple fellas helped him out named Ralph Gonzales and Todd Schnick.

They was puttin' Republicans in power left and right and then Abramoff got caught red-handed with his hand in more than jest one cookie jar. Plus all that he was stealin' from the Indians! Heck he even got caught up with some mob boys down in South Florida over some gamblin' boat and murder came up there with this Greek guy named Gus.

It blew that gamblin' - and it was a cut-throat deal operation - wide open and everybody had to go runnin' to the bank to protect what's left, prolly in Bermuda or Bahamas offshore.

Well then Ralph Gonzales went on down to Florida and opened up a politickin group called Strategums, and helped out all kinds of Republican folks in Alabama, Georgia, Florida and yes sir, gamblin' capitol of the world, Las Vegas Nevada.

He and his company "Strategum" helped out all kinds of folks in gettin' elected, like Congressmen, Senators, Judges, state senators, representatives and county commissioners: names like Feeney, and Troy King, Attorney General in Alabama, and Steve King Judge (ain't no kin.) Heck he had his fingers all over those gulf states and tied up with Las Vegas to boot, where gamblin' is king and Jack Abramoff and Ralph Gonzales ain't.

In the midst of it all then he had a buddy and house pardner named Abrami and then this man named Drake showed up, out of, some folks said North Carolina, and then shot 'em both before he killed his own self dead. All three's found in Ralph Gonzalez Florida house and nobody knows why.

And they ain't tellin.'

But then in the midst of it all way before all that, see soon to be Congressman Feeney's runnin in a Florida race, and this big rat shows up named Curtis and starts telling stuff about China an spies and scary stuff bein' hooked in to Feeney, then all of a sudden a guy's sent down to Florida to investigate what the rat was sayin'. Then, they find the investigator dead as four o'clock in a dang dirty South Georgia motel room, sayin' it's suicide and everybody knows different.

Heck they put on an investigation and then called it off real quick like they do. Ray's Lemme's dead, anybody else scared to investigate this mess. Besides that the Florida DOT Government would not allow it anyhow!

So then the guy named Jason Drake shot and killed Abrami and Gonzales both there cold in their own house, then somebody says he's got connections to Patrick McHenry, not that one up north, but the one in
North Carolina. He's a politician on the west side, and he's a Republican too. And he had this guy named Lay a friend fixed votes was livin' with him and
connected to Tennessee at the Kentucky line. So somebody said Drake, the Florida killer who suicided hisself, was workin for McHenry, so if that's true
how'd he get all tied up in this mess of knots and mats?

So then they put the Alabama Governor in prison then the senators, and everybody's sayin' it's all just dirty politics, but somehow they're havin' their own private wars on our turf. Don't make sense.

Other folks say if you dig deep enough you'll find cocaine before you get to China. And the trail goes all the way to the White House. And if you start
followin' that trail you might end up dead on Arkansas railroad tracks.

So then the good folks who love the Lord found out they'd been had by a bunch of Greedy Devils down South, and decided they ain't votin' for just anybody from now on.

And we ain't gettin' much outta the news other than every once and again another rotten potato shows up and everbody says, "Yep I knew that was comin," and then they all say, nothing but a bunch of low life scum runnin' anything these days.

They sold us out to China and gave our kid's jobs away. But we gave 'em our kids to fight in their wars. And we gave em best health care, and benefits, and they got the finest security folks in the world. They got drugs all over and put ours in prison, run our families broke, and take everything they can git. It ain't never enough.

They just take and they ain't givin' back. And they ain't gonna figure out all this mess. They just let it all run its course and then nothin' happens. They
just shove it down under the rug for the grandkids to find out.

Those drug boys runnin this town got their grandkids at the courthouse, now they'ze big time lawyers. Time goes on just keep yore mouth shut so's you won't be troubled. ....
Posted by Alex Constantine at 11:06 PM