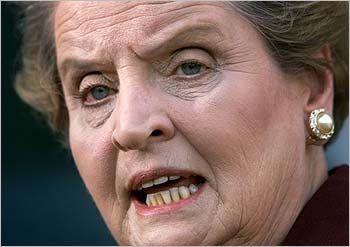 “The world agrees that genocide is unacceptable and yet genocide and mass killings continue. Our challenge is to match words to deeds and stop allowing the unacceptable. That task, simple on the surface, is in fact one of the most persistent puzzles of our times. We have a duty to find the answer before the vow of ‘never again’ is once again betrayed”.

In the same vein of the press release former Secretary Cohen went on to state;

“We are convinced that the U.S. government can and must do better in preventing genocide—a crime that threatens not only our values but our national interests”.

Both Albright and Cohen, in a signed statement lobbied against a human rights issue in Washington, formal U.S. recognition of the Armenian genocide.

Blatantly insulting human rights advocacy, Albright stated (in part); “Our challenge is to match words to deeds…”. Is Albright the same person who just weeks prior lobbied to stop the Armenian genocide resolution?

Yes, regrettably Albright has discredited herself by her own admonitions.

Regrettably, a web site search of the United Institute of Peace where this “Task Force” originates indicates a zero result of direct research on the Armenian genocide issue. It is also with regret that virtually none of the long list of sixty specialists has background knowledge on the subject (according to the biographies).

Further study of the United Institute of Peace will show that Secretary of State Condeleeza Rice, and Robert Gates Secretary of Defense, are ex officio members of this institution, both of whom were leading “arm twisters” in the offices of Congress, fighting against human rights i.e. Armenian genocide recognition.

On its face the Institute of Peace seems to be a positive undertaking for the betterment of humanity, but recent actions by its members more notably Madeline Albright, William Cohen, Secretary of State Condeleeza Rice, and Secretary of Defense Robert Gates seem to point to a selective discriminating agenda fueled by pure politics.

An argument can be made that perpetrators of genocide may likely be emboldened to commit more atrocities when they see current and former U.S. State Officials (mentioned above) shamelessly work against human rights issues in Congress. We need to see integrity with a moral compass better serve the will of the American people.

Until I see a drastic change in public policy this “Genocide Prevention Task Force” may be better served as mere window dressing.

http://www.bloggernews.net/111797
••••••••••
November 14, 2007
Genocide Prevention Task Force clarifies: will not be examining whether Israel has committed genocide

The newly formed Genocide Prevention Task Force indicated Tuesday night that it will not be examining whether Israel has committed genocide in the West Bank and Gaza despite earlier statements that it would be addressing the subject.

The task force of prominent former US officials was announced at a press
conference earlier Tuesday and will be working over the next year to help
the American government best respond to and prevent genocide.

Though one of the co-chairs, former US Defense Secretary William Cohen,
originally said that the situation in the West Bank and Gaza would be
considered, the task force later clarified that such an inquiry would be
beyond the scope of the panel.

"Its task is not to determine which situations, past or present, including
the West Bank and Gaza, constitute genocide, but to develop policy
recommendations that enable the United States to prevent future genocides
from occurring," Cohen, along with co-chair Madeleine Albright, said in a
statement issued Tuesday night.

Cohen and Albright, a former US secretary of state who served with Cohen
under former US president Bill Clinton, are joining with other top former US
policy-makers and politicians, including one-time Republican vice
presidential nominee Jack Kemp and former US Middle East envoy Gen. Anthony Zinni, for the yearlong project.

The task force will look at specific areas of action, including early
warnings, preventative diplomacy, work with international institutions, and
military intervention, and make recommendations in December 2008.

"The world has said that genocide is unacceptable, and yet genocide
continues and mass killings continue," Albright said. "We have to find an
answer before the vow of 'Never again!' is once again betrayed."

But many of those attending the press conference were focused on present and past atrocities rather than future ones.

Several Armenian journalists questioned Cohen and Albright for chairing the
task force when they had recently argued against a proposed Congressional
resolution calling the Turkish slaughter of Armenians during the Ottoman
Empire genocide.

"We're trying to look forward rather than backward," Cohen said, calling the
decision a "practical" one aimed at protecting US troops who rely on
Turkey - which would be angered by such a resolution - in their efforts in
the Iraq war.

Another member of the audience then challenged them for supporting friendly countries such as Israel despite allegations of genocide against the
Palestinians.Cohen had responded, "The issue of whether genocide has taken place in the West Bank or Gaza certainly will be part of [what] the task force [is] looking into."

He then told The Jerusalem Post that the task force had yet to establish
criteria for which cases and histories would be examined.

"We're going to take a broad look across the global spectrum," he said.
"There's nothing that's off the table."

Arthur Berger, the US Holocaust Memorial Museum's senior adviser for
external affairs, said that he did not expect Israel to be singled out or
dwelled on by the task force; instead, he thought the panel would focus on
places like Rwanda and Darfur, where there was a large consensus that
genocide had taken place.

"They're really going to look in the broadest possible way at genocide and
mass atrocities, and how the US can lead in a moral way to actually save
lives in the future," Berger said.

In her presentation, Albright said that the "frustration" of situations like
that of Darfur had contributed to the creation of the task force.

"Things haven't worked, and watching Darfur is one of the things that has
led us all to say, okay, let's give this another try," she said. "Let's see
if there is some way to organize ourselves better to deal with it."

The US Holocaust Museum is helping to convene the task force, along with the US Institute of Peace and the American Academy of Diplomacy.

"The whole concept of this thing was to look at issues of the Holocaust,"
Berger said, "and give teeth to 'Never again!'"

WASHINGTON, DC – The credibility of former Secretary of State Madeleine Albright and former Secretary of Defense William Cohen in leading a newly launched genocide prevention initiative was called into question, today, by reporters who cited their ongoing efforts to block Congressional reaffirmation of the Armenian Genocide (H.Res.106 / S.Res.106), reported the Armenian National Committee of America (ANCA).

“Sadly, the Genocide Prevention Task Force’s worthwhile efforts to build consensus for an unconditional stand against genocide as a core U.S. foreign policy priority are undermined right out of the box by the fact that its leading figures, Madeleine Albright and William Cohen, are today actively and publicly working to block American recognition of the Armenian Genocide,” stated ANCA Executive Director Aram Hamparian.

Secretaries Cohen and Albright were keynote speakers at a National Press Club press conference hosted this morning by the U.S. Holocaust Museum and Memorial, U.S. Institute for Peace, and American Academy of Diplomacy, to announce the formation of the Genocide Prevention Task Force, which the two will co-chair.

In response to questions raised by Hamparian and reporters from media outlets including Asbarez, the Armenian Weekly, and the Armenian Reporter, the two former secretaries were largely evasive, and consistently used euphemistic language to avoid proper reference to the Armenian Genocide.

“There are no absolutes in this,” explained Secretary Cohen, referring to U.S. action against genocide. “There is an element of pragmatism... I think anyone serving in public office necessarily has to have a set of balancing factors to take into account.”

Secretary Albright stressed that taking action on genocide is a difficult decision. “These are issues people have talked about a long time and they may come out in statements and then, ultimately, when you’re in the government (as we both have been) and you have to make very tough decisions, you have to look at the overall picture. I think we have to admit that. Otherwise, we’re not going to get off the ground here. These are very, very hard issues.”

“Secretaries Albright and Cohen can’t have it both ways. Either they stand unconditionally against all genocides all the time, or, by choosing to only raise their voices when it's convenient, they surrender their moral standing on this, the core human rights and humanitarian issue our time,” commented Hamparian.

Both letters may be found on the ANCA website at:
http://www.anca.org/assets/pdf/misc/albright_cohen_106.pdf

On October 10th, the House Foreign Affairs Committee adopted the resolution, which calls on U.S. foreign policy to properly reflect the genocide of over 1.5 million Armenian men, women and children from 1915-1923 in Ottoman Turkey. A similar measure in the Senate, led by Deputy Majority Leader Richard Durbin (D-IL) and John Ensign (R-NV), has 33 cosponsors.

The House measure is expected to come to a floor vote later in 2008.