The Dehydration of America: Water Shortage in Atlanta 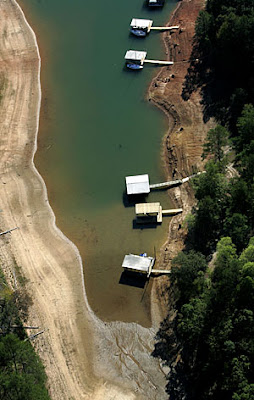 Atlanta water use is called shortsighted - The rapidly growing metropolis' 'cavalier' attitude toward conservation is the real problem, critics say
By Jenny Jarvie

ATLANTA — When Rick McKee, the editorial cartoonist of the Augusta Chronicle newspaper, set out to capture the historic and severe drought that is afflicting the Southeast, he did not draw parched rivers or shriveled crops or brown lawns: He drew an oafish, bloated hulk of a boy holding up a straw to slurp up water from a smaller boy's water fountain.

Above the larger boy, a sign reads "Atlanta," above the other, "Everybody else."

It is, in many ways, a cartoon that sums up feelings across the Southeast now that Lake Lanier, the reservoir that supplies drinking water to most of metropolitan Atlanta's 5 million residents, is draining to historic lows. With government officials issuing stark projections that Atlanta could run out of water within three months, Georgia politicians have pleaded with the U.S. Army Corps of Engineers to decrease the amount of water being released. The flow has been required to save two species of mussels 200 miles downriver.

Yet while Georgia's leaders try to cast the water shortage as a battle between 5 million people and a few mussels -- with the message that greater priority should be given to Atlanta residents -- there is a growing sense that the metropolis itself is the problem: Critics say Atlanta's rapid population growth, coupled with blithe disregard for water conservation, is straining the region's ecosystem.

A break came Thursday in Georgia's 17-year water war with Florida and Alabama: The GOP governors of the three states agreed to reduce by 16% the amount of water released downriverfrom Lake Lanier, which would slow the drain on Atlanta's main water source.

But experts say the Southeast's struggles over water resources are far from over.

"What was not on the table, and what has got to be on the table, is Atlanta's unrestricted growth and cavalier attitude to water use," said Sally Bethea, executive director of Upper Chattahoochee Riverkeeper, a watchdog group.

Such concerns are not coming just from environmental lobbyists, who have long argued that Atlanta must do more to conserve water.

Florida Gov. Charlie Crist, in opposing a request by Georgia Gov. Sonny Perdue to President Bush to permit a reduced downstream flow, wrote in his own letter to Bush that Florida's $134-million commercial seafood industry depended on the water. Crist added that his state had acted responsibly in enacting water legislation. Alabama Gov. Bob Riley argues that downstream communities and a nuclear power plant in his state require water too.

Even within Georgia, the drought has brought to the fore long-simmering resentment against the booming capital of the New South. About 140 miles east in Augusta, which sits on the Savannah River, there is concern that Atlanta could slake its thirst on Augusta's water supplies. Last month, Atlanta Mayor Shirley Franklin suggested that Atlanta explore piping in water from the Savannah or Tennessee rivers.

"Atlanta is a greedy, poorly designed behemoth of a city incapable of hearing the word 'no' and dealing with it," said a recent editorial in the Valdosta (Ga.) Daily Times.

The editorial said Atlanta's "politicians can't bring themselves to tell their greedy constituents complaining about the low flows in their toilets this week that perhaps if they didn't have six bathrooms, it might ease the situation a bit."

Atlanta is not the only city grappling with water shortages. In 2003, a Government Accountability Office report on the nation's freshwater supply found that 36 states anticipated water shortages in the next decade.

Two months ago, a federal judge in California ordered protective measures for the tiny endangered smelt fish in the Sacramento-San Joaquin River Delta, a mandate that water officials said could cut by a third the flow of water to Southern California from the north.

Yet while cities such as Los Angeles, Las Vegas and Denver have ushered in water conservation measures -- including offering incentives, installing high-efficiency toilets and low-flow shower heads, and increasing monthly water bills for big water users -- experts say Atlanta, one of the fastest-growing metropolitan regions in the country, has been particularly shortsighted.

With 2 million more residents projected by 2030, water use is expected to rise to more than 700 million gallons a day.

For its drinking water, Atlanta relies almost entirely on Lake Lanier, a 38,000-acre reservoir in northern Georgia built in the 1950s.

"If your population is growing, you cannot expect to do the same old things you did a decade ago," said Chris Brown, executive director of the California Urban Water Conservation Council. "You have to change the way you behave."

This has not happened in Atlanta, conservationists say. In 2003, the area's 16-county Metropolitan North Georgia Water Planning District adopted a water conservation plan. Yet most counties have not implemented the recommendations, such as reducing leaks and raising billing rates for those who use more water.

Last year, a bill failed in the state House of Representatives that would have required older homes to be retrofitted with low-flow fixtures before they were resold.

Some environmentalists are questioning whether Atlanta can handle 2 million more people.

"Conservation may not be the answer in and of itself," said Elizabeth Nicholas, general counsel for Upper Chattahoochee Riverkeeper. "There just isn't enough fresh water here to support major growth. We need to be smarter about how and where we're growing."

Conservationists' suggestion that the state should prohibit building if no water is available rankles developers and the business community.

"People are coming to this state whether environmentalists like it or not," said Ed Phillips, executive vice president of the Home Builders Assn. of Georgia. "What are we going to do? Put up a fence?"

Many of Georgia's political leaders say the solution to the drought is not to stop developing but to manage water more efficiently, building more reservoirs to enhance water storage.

"We have not consumed our way into drought," said Carol Couch, director of the Environmental Protection Division of the Georgia Department of Natural Resources. She said there must be planning to accommodate growth, including building more reservoirs and encouraging residents to conserve and reuse water.

Conservationists have traditionally opposed additional reservoirs, arguing they would lead to much water loss through evaporation and would severely affect the environment.

For now, as water levels at Lake Lanier drop about a foot a week, Atlantans have been urged to shorten showers and to report neighbors who violate the ban on outdoor watering. Businesses have been asked to cut water use by 10%.

Last week's tri-state compromise is awaiting approval by the U.S. Fish and Wildlife Service. The agency is expected to issue its opinion by the middle of this month after assessing how the reduced flows could affect the endangered fat threeridge and threatened purple bankclimber mussels in Florida's Apalachicola River. The U.S. Army Corps of Engineers would execute any change.