Is the GOP Ready to Nominate a Mob-Connected Man for the Presidency? 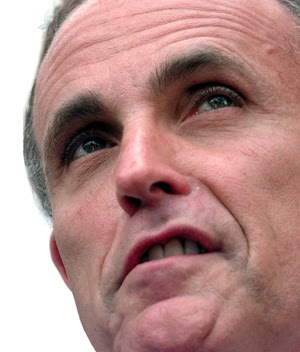 This post, written by Howie Klein, originally appeared on Down With Tyranny!
November 21, 2007

Giuliani's problems go well beyond his immediate associates-- criminals and ne'er-do-wells like best buddy/Mafia bagman Bernie Kerik, South Carolina cocaine dealer Tom Ravenel, or an assortment of monstrosities in his inner circle from child molesting priest Alan Placa to countless unscrupulous money men and paid off shills working to rig the election for Giuliani, like Paul Singer, the guy who has been bankrolling the attempt to steal California's electoral votes and the one fireman willing-- for cash-- to dispute Rudy's shameful real 9/11 record.

Today's Chicago Tribune has been digging where Republicans feared someone was bound to go eventually: Giuliani's multimillion dollar, very shady business connections. And "each revelation raises new questions for the first major presidential candidate in memory to build a multimillion-dollar business on the foundation of his time in elected office, and not the other way around."

Giuliani has managed to hide most of his mobster connections-- but not all. He hides behind "confidentiality agreements" and, basically, says that the crooks he's dealing with are entitled to their privacy. "Questioned during a campaign appearance Tuesday in Chicago, Giuliani said that, 'all of Giuliani Partners' clients, maybe with one or two exceptions, I'm not even sure that's right, are public. ... At least the ones that I was familiar with.'"

The Tribune uncovered a direct and personal Giuliani connection to a big time Macao/Hong Kong gambling mobster/billionaire who is in cahoots with North Korean dictator Kim Jong Il. Giuliani was to have been paid an immense amount of money to provide security for the gambling resort in Singapore Kim Jong Il and his criminal partners wanted to put up to help launder drug money and other criminal enterprises they are engaged in. Giuliani went to Singapore for the presentation right after he announced his intention to run for president (of the United States) and hobnobbed with some of Asia's most notorious gangsters.

Giuliani lamely claims he was dealing with the gangster's son, Lawrence Ho, not the elderly mobster himself, Stanley Ho. If Giuliani weren't running for president, this would just be funny. It would have been like saying you were dealing with Michael Corleone not Vito Corleone. The government of Singapore looked at the collection of gangsters and shady characters who were part of the Giuliani team, decided they were a dangerous bunch of mobsters and triad hoodlums, and gave the contract to another company. Republicans look at the same sordid mix-- and want to give Giuliani the White House!

Howie Klein is the creator of the blog Down With Tyranny!