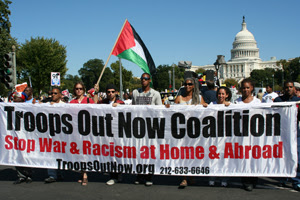 Congress Considers How to ‘Disrupt’ Radical Movements in the United States
www.infoshop.org
November 21 2007
Contributed by: Admin

Bringing the War on Terrorism Home: Congress Considers How to ‘Disrupt’ Radical Movements in the United States

The Indypendent (New York City)
From the November 21, 2007 issue

The proposed law, The Violent Radicalization and Homegrown Terrorism Prevention Act of 2007 (H.R. 1955), was passed by the House of Representative in a 404-6 vote Oct. 23. (The Senate is currently considering a companion bill, S. 1959.) The act would establish a “National Commission on the prevention of violent radicalization and ideologically based violence” and a university-based “Center for Excellence” to “examine and report upon the facts and causes of violent radicalization, homegrown terrorism and ideologically based violence in the United States” in order to develop policy for “prevention, disruption and mitigation.”

Many observers fear that the proposed law will be used against U.S.-based groups engaged in legal but unpopular political activism, ranging from political Islamists to animal-rights and environmental campaigners to radical right-wing organizations. There is concern, too, that the bill will undermine academic integrity and is the latest salvo in a decade-long government grab for power at the expense of civil liberties.

David Price, a professor of anthropology at St. Martin’s University who studies government surveillance and harassment of dissident scholars, says the bill “is a shot over the bow of environmental activists, animal-rights activists, anti-globalization activists and scholars who are working in the Middle East who have views that go against the administration.” Price says some right-wing outfits such as gun clubs are also threatened because “[they] would be looked at with suspicion under the bill.”

The Bill of Rights Defense Committee (BORDC), which has been organizing against post-Sept. 11 legislative attacks on First Amendment rights, is critical of the bill. “When you first look at this bill, it might seem harmless because it is about the development of a commission to do a study,” explained Hope Marston, a regional organizer with BORDC.

“However, when you realize the focus of the study is ‘homegrown terrorism,’ it raises red flags,” Marston said. “When you consider that the government has wiretapped our phone calls and emails, spied on religious and political groups and has done extensive data mining of our daily records, it is worrisome of what might be done with the study. I am concerned that there appears to be an inclination to study religious and political groups to ultimately try to find subversion. This would violate our First Amendment rights to free speech and freedoms of religion and association.”

One pressing concern is definitions contained in the bill. For example, “violent radicalization” is defined as “the process of adopting or promoting an extremist belief system for the purpose of facilitating ideologically based violence to advance political, religious, or social change.”

Alejandro Queral, executive director of the Northwest Constitutional Rights Center, asks, “What is an extremist belief system? Who defines this? These are broad definitions that encompass so much. … It is criminalizing thought and ideology.”

For her part, Marston takes issue with the definition of homegrown terrorism. “It is about the ‘use, planned use, or threatened use, of force or violence to intimidate or coerce the government.’ This is often the language that refers to political activity.”

Congressional sponsors of the bill claim it is limited in scope.

“Though not a silver bullet, the legislation will help the nation develop a better understanding of the forces that lead to homegrown terrorism, and the steps we can take to stop it,” said Rep. Jane Harman (D-Calif.) Oct. 23, who co-authored the bill. “Free speech, espousing even very radical beliefs, is protected by our Constitution — but violent behavior is not.”

The bill’s purpose goes beyond academic inquiry, however. In a press release dated Nov. 6, Harman stated: “the National Commission [will] propose to both Congress and [Department of Homeland Security Secretary Michael] Chertoff initiatives to intercede before radicalized individuals turn violent.” (Harman’s office refused three separate requests by The Indypendent for comment.)

Some assert this would allow law enforcement agencies to target radicals in general. Price says, “This bill is trying to bridge the gap between those with radical dissenting views and those who engage in violent acts. It’s a form of prior restraint.”

Price explains how this may work, citing an example in his home town of Olympia, Wash., where a peaceful blockade took place in early November at the Port of Olympia to prevent the shipment of war materials between the United States and Iraq. He says, “It will be these types of things that will start getting defined as terrorism, including Quakers and indigenous rights’ campaigns.”

Kamau Franklin, an attorney with the Center for Constitutional Rights (CCR), is also concerned at the targeting of peaceful protests. He says the “Commission’s broad mandate can lead to the ability to turn civil disobedience, a form of protest that is centuries old, into a terrorist act.” It’s possible, he says, “that someone who would have been charged with disorderly conduct or obstruction of governmental administration may soon be charged with a federal terrorist statute.”

“My biggest fear is that they [the commission] will call for some new criminal penalties and federal crimes,” says Franklin. “Activists are nervous about how the broad definitions could be used for criminalizing civil disobedience and squashing the momentum of the left.”

The bill provides a list of Congressional findings, including a failure to understand the development and promotion of “violent radicalization, homegrown terrorism and ideologically based violence,” which is argued to pose a threat to domestic security. The Internet was highlighted as a tool in “providing access to broad and constant streams of terrorist-related propaganda to United States citizens.”

The Congressional Budget Office estimates that the bill would cost $22 million over four years. ...