Dying for a Diet Coke? (If so, You are a Drug-Addicted Laboratory Rat) - PART ONE

Don't drink the Kool-Aid ... How deceptive is the lie that aspartame has been "thoroughly tested" for safety, per Nutrasweet Co. press releases? When the product underwent "trials" by scientists at GD Searle in the late 1960s, the company credited with discovering the sweet-tasting rdna derivative, four of the test chimps developed tumors after one year. The scientists ACTUALLY REMOVED THE CANCEROUS GROWTHS SURGICALLY so they could claim on paper that the test chimps exhibited "NO TUMORS." This was, of course, a flagrant lie - no less than current public claims of aspartame safety issued by Monsanto's bastard child, Nutrasweet. THAT'S the level of deception we're talking about. This article, published in New Zealand, was sent to me by anti-aspartame activist Betty Martini, who recently returned from a lecture tour on the island. Note the interest of intelligence personnel in her - there is much more to the aspartame story than has ever been told. Steer clear of this toxin - or the next lumpy test chimp may be you. 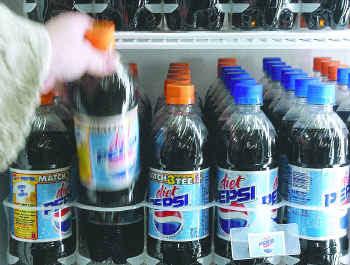 (NOTE: This is the actual text I sent to INVESTIGATE magazine in New Zealand in August 2007. The final panel item referring to the interest of the NZ Security Intelligence Service in Betty Martini was omitted from the INVESTIGATE story. In my 50 years of experience, few publications ever permit a story of this length to be used, which of course makes it rather difficult to give proper coverage in one hit to a story as convoluted as aspartames. So Ian Wishart deserves to be complimented for his courage in airing the issue.)

Dying for a Diet Coke? (Part One)
By Chris Wheeler

" ... I am a Pediatrician, a Professor of Pediatrics at Emory, and have spent 25 years in the biomedical science, trying to prevent mental retardation and birth defects caused by excess phenylalanine.. . . . . .I have considerable concern for the increased dissemination and consumption of the sweetener, aspartame, (1-methylN-L-a-aspartyl-L- phenylalanine) in our world food supply. This artificial dipeptide is hydrolyzed by the intestinal tract to produce L-phenylalanine which in excess is a known neurotoxin. Normal humans do not metabolize phenylalanine as efficiently as do lower species
such as rodents and thus most of the previous studies in Aspartame effects on rats are irrelevant to the question, 'Does phenylalanine excess occur with Aspartame ingestion?'" - Statement by Louis J. Elsas, II, M.D., Professor of Pediatrics, before the USA Senate Committee of Labor and Human Resources on the subject "Nutrasweet: Health and safety concerns", November 3, 1987.

Professor Elsas blew the warning whistle on that popular diet sweetener, aspartame or Additive 951, some 20 years ago now. As he stressed at the time, the rat studies which were used to prove aspartames safety are inappropriate because human beings are not rats, a point which New Zealand and Australian food safety regulators, toxicologists, doctors and politicians still refuse to recognise. We, in possession of a bit more elementary commonsense, may choose to differ on the point of whether we are all being treated as the real laboratory rats by the time the sad but also absurd - tale of aspartame is finally spelled out in these pages.

Rats are, of course, the basis of food safety science. We can't afford to kill human beings in the course of supporting food industry profiteering. We use the poor rats and dogs, cats, rabbits and monkeys as part of our sad experiments that have seen some 80,000 toxic chemicals introduced for our convenience over the past 60 years by industry with often the barest attention paid to long-term health outcomes for actual human beings. Rats are in a sense - our surrogate consumer advocates: they die on the Cross of science for our sins and bad science makes sinners of us all.

In the meantime it has often become difficult to find anyone in our immediate circle of friends who is really well, while a familiar pattern has developed of alarming new diseases and disorders developing at earlier and earlier ages alongside endemic infertility, an increased rate of birth defects and children and even babies falling sick with cancer something previously unknown to our forefathers. But so familiar are we with the sea of synthetic
chemicals washing around us we never attribute blame to them, in fact we even add them to our food to enhance flavour, mouth feel, smell, colour and, of course, sweetness the thing we use aspartame for instead of ordinary old sugar or honey.

But what about our children?

Consider for a moment how many cities around New Zealand and Australia are opening new hospitals and setting up increased facilities especially for treating children who in ever-increasing numbers are going down with what used to be relatively rare adult diseases like diabetes, leukaemia, brain tumours and weird new diseases like autism and hyper-activity that turn tiny kids into monsters. Generations who had children before the 1950s would wonder why we so nonchalantly accept the huge toll of chronic disease in
children that now exists, with so little comment and such apparent acceptance of the inevitable.

Meanwhile we carry on feeding ourselves and our children with the thousands of new convenience foods laden with a witchs cauldron of chemical preservatives and additives, convinced by TV advertising and our faith in a vague common social mythology that neither our politicians, our health regulatory bureaucrats nor our complaisant food and beverage industries would deliberately poison us.

Worst of all, many of us are now feeding a new generation of human beings - our babies, our children and our pregnant selves - with a popular synthetic sweetener poison, aspartame/Additive 951 (also known as Nutrasweet, Equal, Spoonful, Benevia, Equal Measure, Canderel, etc), which has been reported in a long series of scientific, peer-reviewed studies as carrying the ability to maim, distort and disable intellectual and physical development from the foetal stage to adolescence. In fact over the 26 years that have passed since aspartame's introduction into the world food chain we are now moving into generations of human beings whose parents and
parent's parents have been continuously exposed from breakfast to dinner-time to aspartame, monosodium glutamate and a baneful assemblage of human nervous system toxins that American neurosurgeon Dr Russell Blaylock has termed excitotoxins, chemical poisons that can over-excite the neural pathways to the point of nerve death. (1)

What is more, while we have finally accepted in our law courts and at a Government level that substances like Agent Orange, lead, and blue asbestos can medically disable particularly where long-term exposures are involved, we seem quite unable to extend that logic to the artificial dietary chemicals that we consume every day, year after year.

Little wonder then, that ill health and classrooms full of medicated children are part of normal, daily life and lunatic murders, road-rage, air-rage, depression and a steady media reportage of odd and irrational behaviour in people of all ages is just put down to modern living.

Since current Labour Party policy is recommending the use of diet products containing aspartame in our schools in order to counteract the growing obesity problem in our increasingly sedentary child population, we should pay attention to this recent warning from Professor Ralph G. Walton, M.D., Professor of Clinical Psychiatry, at the USAs Northeastern Ohio Universities College of Medicine:

To whom it may concern:

Although undoubtedly well intentioned, any attempt to replace sugared beverages with aspartame containing diet products will, in my opinion, have a devastating impact on the health of our children and adolescents. The alarming increase in obesity, type II diabetes, and a wide variety of behavioural difficulties in our children is obviously attributable to multiple factors, but I am convinced that one powerful force in accentuating these problems is the ever increasing use of aspartame.

Aspartame is a multipotential toxin and carcinogen. The dipeptide component of the molecule can alter brain chemistry, significantly changing the ratio of catecholamines to indolamines, with resultant lowering of seizure threshold, production of carbohydrate craving and in vulnerable individuals leading to panic, depressive and cognitive symptoms.

The diet food industry and the F.D.A. (plus, also, our own NZFSA and FSANZ - ED) are fond of saying that aspartame is "the most studied product in history" with an outstanding safety record. In fact however virtually all of the studies in the medical literature attesting to its safety were funded by the industry, whereas independently funded studies, now numbering close to 100, identify one or more problems.

It would be especially tragic if an attempt to improve the health of our children led to even greater exposure to this highly toxic product.

Thank you for your attention to this urgent public health issue.

NOTE: Dr. Walton's study on aspartame: "Adverse Reactions to Aspartame: Double-Blind Challenge in Patients from a Vulnerable Population, is viewable on the website Reactions-1993.htm> and in the folder
Posted by Alex Constantine at 2:37 PM