Military Chief Says Russia Not Obliged To Protect World From US 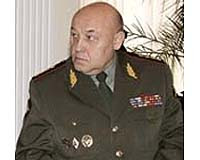 Yury Baluyevsky, the chief of Russia's general staff, said in an interview with the Russia Today TV channel on Tuesday that the Russian Armed Forces were under no obligation to protect the world from the U.S. Answering a question as to whether or not the world could count on Russia to defend it from "insidious American plans," Baluyevsky replied, "Today, there is no need to be afraid of the Russian Armed Forces. However, I do not believe that the Russian military is obliged to defend the world from the evil Americans".

Gen. Yury Baluyevsky is flying to Brussels later today to discuss with NATO chiefs of staff, among other things, Russia's suspension of its Conventional Armed Forces in Europe (CFE) Treaty obligations.

Baluyevsky said last Thursday that Russia would no longer be bound by current weapons and equipment limitations after its moratorium on the CFE Treaty comes into force.

The State Duma, Russia's lower house of parliament, voted on November 7 in favor of President Putin's bill to impose a moratorium on the CFE Treaty.

The moratorium is set to come into effect on December 12, after final approval by the upper house of parliament, expected to vote on the issue on November 16, and President Vladimir Putin.

The chief of Russia's military general staff also told the Russia Today TV channel that the CFE Treaty put Russia at a disadvantage.

"It was an onerous treaty for Russia. It was a treaty that Russia alone honored," he said.

Asked why Russia had signed the document in the first place, Baluyevsky said that at the time, in 1990, the goal was to avert a war, and the treaty effectively served its purpose.

He also said Russia's Armed Forces, like all militaries in the world, would be putting an emphasis on quality, not quantity.

"It will be a leaner but meaner, well trained and equipped, and professional force," the general said.

http://www.spacewar.com/reports/Military_Chief_Says_Russia_Not_Obliged_To_Protect_World_From_US_999.html
Posted by Alex Constantine at 9:06 AM