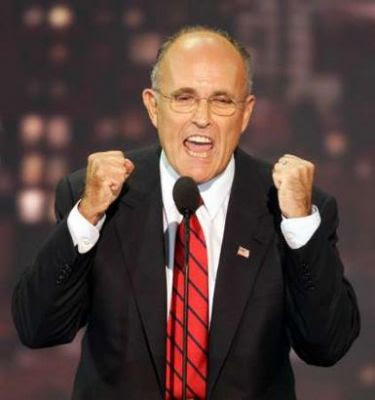 Rudy Giuliani is surrounded by some of the vilest and most dangerous enemies of the Arabs and Muslims, acting as advisors in his campaign to win the nomination of the Republican Party for the American presidency. If the proverb 'Birds of a feather flock together' is true, 'president' Giuliani will make us long for George Bush's days since he out-Bushes him. In Israel, he referred to 'the blood bond' with the Jewish state. The advisors whose names are mentioned in Newsweek and other sources are:

Some of them are less harmful than others. Kasten is a former Congressman, mainly known as a conservative in the Reagan team, and now he is Guiliani's advisor on foreign affairs. As for Nile Gardiner he is The Director of The Heritage Foundation's Margaret Thatcher Center for Freedom. He contributed to rightist publications and TV networks such as Fox. Charles Hill, a former staff member of the foreign ministry, worked as assistant to George Shultz and he was the political counselor for the U.S. Embassy in Israel.

However, a more important figure than the ones mentioned above is Stephen Rosen, a university professor and a member of The Project for the New American Century team. Since its launch, he has engaged in a campaign aimed at imposing the hegemony of an American empire all over world. The members' letters addressed to Bill Clinton and George Bush urge them to wage a war on Iraq as the empire intends to dominate the entire Middle East and spread American military bases in it. The letters also urge lending support for Israel, reject a compromise with the Palestinians leading to the creation of a state of their own, and make the war on terror a pretext for hegemony.

Peter Berkowitz is considered the team theoretician. He is founding member and the director of The Israel Program on Constitutional Government. He is a neocon Jew who gives priority to Israel's interests over any other interests, including those of his own country, the United States.

Despite the above, Martin Kramer, Daniel Pipes, and Norman Podhoretz remain the worst and the most dangerous for Arabs, Muslims, and international peace.

Kramer and Pipes founded Campus Watch to persecute any professor criticizing Israel and to launch campaigns against any university curricula tending to doing justice to Arabs and Muslims. Their efforts are part of the Israel lobby activities.

Yet, Pipes is more despicable than his partner. He created the Monitoring Islamist Media Weblog and he claims that the confrontation is with Islamofascism. As I have frequently referred to him in this column, I choose some self-defense excerpts from his books that indeed condemn him.

Replying to a Newsweek article, he said that advisors do not hold common views and that he personally objected to the expression 'war on terror', because in his opinion, it is a war against Islamofascism. He asserted his opposition to Bush's policy in the Middle East and rejected the idea of a Palestinian state as it represents a reward to terrorists. He also considers democracy in the Middle East an exaggerated ambition and a useless one because it will result in the Islamists' domination.

This man is poisonous and venomous. I can accuse him of being a Fascist promoting war while denying Israel's crimes and offering it blind support that increases hatred for the Jews, which in turn means that he is an anti-Semite.

My opinion of Podhoretz is much lower than the above. This radical has the double of all Pipes' attributes. His recent book World War IV: the Long Struggle against Islamofascism is racist and anti-Semitic. The man prays so that George Bush attacks Iran. He also wishes to see the attack involve Syria, Lebanon, Saudi Arabia, the Gulf countries, Egypt, and even Pakistan and countries in central Asia. This will result in increasing hatred for the Jews around the world.

Podhoretz is a radical par excellence, and in case Giuliani becomes president and takes into consideration his advice, another war or destructive wars will erupt.

Like those advisors, 'president' Rudy Giuliani will be the American Ariel Sharon. But as I have focused on the interesting aspects of his policy from the Arabs and Muslims' angle, I move on to other aspects.

Though Giuliani out-Bushes George Bush with his rightist inclinations, he endorses arms reduction. What is meant here is not armament worldwide, but rather the possession of arms in the United States despite the power of 'the gun lobby'. He supports abortion and homosexuals' rights in the face of the famous Christian Right opposition, and maybe he feels that Christian Zionists are no longer as influential and powerful as they used to be due to their leaders' rich record in scandals ranging from the sexual to the financial, i.e. theft.

It seems that the American Right realizes that Giuliani is their only hope for the Republicans to stay in the White House. Therefore, its members will avoid challenging him straightforwardly over controversial issues. He will not in turn criticize any Republican competitor; he will rather focus on the Democratic candidates, especially Hillary Clinton.

Giuliani claims that he can win in states supposedly settled for the Democrats, including the state of New York. But I do not see him up to the task, as he will not face Hillary alone. She will be backed by Bill who, although he left power with a legacy of scandals behind him, still enjoyed the backing of two-thirds of the Americans, whereas George Bush now enjoys the support of only one-third of his people. For this reason, Giuliani deals with different topics, but he avoids mentioning the president's name since George Bush represents the millstone around the neck of every Republican candidate.