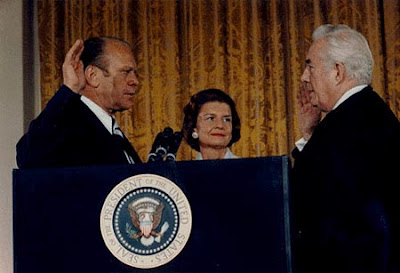 Gerald Ford knew in April, 1974 that Nixon would resign, far in advance of Nixon's announcement in a televised speech on August 8, 1974.

" ... Ford instantly realized his words would make headlines and tried to take them back. "You didn't hear that," he said, then walked around the desk and grabbed DeFrank's tie, telling him he couldn't leave until they had an understanding. After a tense silence, he said, 'Write it when I'm dead.' ... "

Thought you knew all the Watergate secrets? Tom DeFrank kept one for 33 years: Months before Dick Nixon resigned, Gerald Ford -- shrewder than people gave him credit for -- knew Nixon was doomed, and he outmaneuvered both the media and the White House. What's more, he wasn't above strong-arming a reporter to get what he wanted.

In April 1974, DeFrank was a 28-year-old writer for Newsweek -- one of six reporters who traveled regularly with Vice President Ford (who had been appointed to replace the disgraced Spiro Agnew just five months earlier). With the Watergate crisis deepening, the president tapped the affable Michigan congressman as impeachment insurance -- assuming that voters would rather have a Nixon than a Ford in the White House. "That was a real miscalculation," said DeFrank, now New York Daily News Washington bureau chief.

One afternoon, DeFrank found himself alone with the veep -- Ford's press secretary had fallen asleep next door. Ford was taking hits from Nixon loyalists who thought he wasn't sufficiently supportive. "Dick Nixon knows I've been loyal," Ford groused. "Why do they do this?"

DeFrank blurted his opinion: Nixon supporters were angry because he was finished and Ford would become president. "You're right," Ford blurted back. "But when the pages of history are written, nobody can say I contributed to it."

Ford instantly realized his words would make headlines and tried to take them back. "You didn't hear that," he said, then walked around the desk and grabbed DeFrank's tie, telling him he couldn't leave until they had an understanding. After a tense silence, he said, "Write it when I'm dead."

DeFrank went on to cover Ford's presidency and his losing 1976 campaign, and in 1991 began off-the-record interviews with him about Nixon, Carter, Reagan, Clinton and others for publication only after Ford's death in December. "He's far more candid in these conversations than he was in his memoir," said DeFrank, who collected them in "Write it When I'm Gone," out next week.

Would he make the same deal today? DeFrank told us he's not sure, but felt bound to keep this one for three decades: "The truth of the matter is that I gave the vice president of the United States my word."