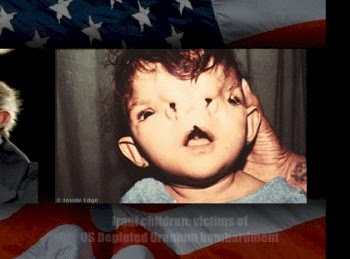 Americans have a very difficult time defining words like "torture" and "war crimes." Everyone missed school the day those terms were explained. High-ranking law enforcement officials with Ivy League educations are often left stammering and scratching when asked to define these baffling concepts.

Their meaning is hoplelessly opaque - what on earth can they be? Perhaps this English major can be of some assistance. .,. War crimes, I know, come in variegated forms - they don't necessarily involve shooting cab drivers and grandmothers in the street. And I do know that often it is policy-makers above brass who are directly responsible but found cowering behind subordinates.

We've heard accounts of unconscionable callousness in Iraq and Afghanistan since those conflicts were incited with Shock and Awe. The slaughter of civilians has been nearly routine. Rumsfeld, when questioned by reporters about American atrocities, had two phases. Early in the occupation of Iraq, he explained that modern weaponry kills with pinpoint accuracy and played down the reports. A few months later - after Americans were desensitized to the atrocity stories - he shrugged and dismissed impertinent reporters with a shrug and a "civilians die in wars" - as if mass murder is an inevitable outcome - and moved on to the next question.

But since Blackwater hit the front pages, little has been said about war crimes committed by Our Boys - many of whom were recruited from the dregs of society and have criminal records. Let's not forget the gullible Dupe Troops who are "fighting for our freedoms" - by willingly occupying a foreign country in response to jingoisms - as the national conversation re US atrocities heats up. - AC 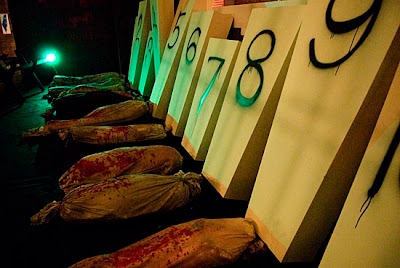 NEW YORK--Private security companies in Iraq have come under political attack after mercenaries for Blackwater USA fired upon unarmed Iraqi civilians in Baghdad‘s Nisour Square, killing 17 and wounding 24. Angry Iraqis, including collaborationist officials of the U.S.-backed occupation regime, have complained that swaggering rent-a-soldiers operate with callous disregard for the safety of Iraqis. A 27-year-old ex-paratrooper for Blackwater even stands accused of--but faces no possibility of prison time for-shooting, while in a drunken frenzy, a man who was guarding Iraqi Vice President Adil Abd-al-Mahdi. ...

But it isn‘t just Blackwater. Official U.S. soldiers are no less stupid or vicious or trigger-happy than their private counterparts.

In 2003 U.S. troops manning a checkpoint in Karbala repeatedly fired a 25-millimeter cannon at a Toyota containing 13 people trying to flee the fighting. At least seven people, including five children age five or under, were killed. "You just f---ing killed a family because you didn‘t fire a warning shot soon enough," a captain radioed to his platoon leader moments later. Checkpoint shootings of innocent civilians became a daily occurrence, due to rules of engagement that placed more value upon the lives of American troops than those of the Iraqis they were supposedly there to liberate.

Often the "checkpoints" were invisible to Iraqi motorists. American soldiers would hide in buildings near an intersection and fire "warning shots" at the engine blocks of approaching vehicles. Assuming that they were being ambushed by bandits, Iraqi drivers would floor the accelerator. Soldiers then treated them as potential suicide bombers, turning them into Swiss cheese. "Many U.S. officials describe...the military‘s standard practice of firing at onrushing cars from their checkpoints in Iraq," reports The Washington Post.

"We fired warning shots at everyone," said one soldier. "They would speed up to come at us, and we would shoot them. You couldn‘t tell who was in the car from where we were. We found that out later. We would just look in and see they were dead and could see there were women inside."

That‘s what happened to Italian intelligence agent Nicola Calipari. After obtaining the release of a journalist from insurgents who had held her hostage for one month, Calipari accompanied her to a checkpoint near the Baghdad airport. U.S. soldiers opened fire. The warning shot missed the engine block. Calipari died; the reporter was wounded. Though their Iraqi driver insists that he was driving their Toyota Corolla (memo to travelers to Iraq: consider a Honda) under 25 miles per hour, the Pentagon said he was "speeding."

A lot of professional U.S. soldiers have screamed their contempt for Iraqis since the beginning of the war. "For almost a year," reported the East Bay Express in 2005, "American soldiers stationed in Iraq and Afghanistan have been taking photographs of dead bodies, many of them horribly mutilated or blown to pieces, and sending them to [a pornographic website]. American soldiers have been using the pictures of disfigured Iraqi corpses as currency to buy pornography."

The Express describes the photos: "A man in a leather coat who apparently tried to run a military checkpoint lies slumped in the driver‘s seat of a car, his head obliterated by gunfire, the flaps of skin from his neck blooming open like rose petals. Six men in beige fatigues, identified as U.S. Marines, laugh and smile for the camera while pointing at a burned, charcoal-black corpse lying at their feet."

"[A] person who posted a picture of a corpse lying in a pool of his own brains and entrails wrote, ‘What every Iraqi should look like.‘ One person posted three photographs of corpses lying in the street and titled his collection ‘DIE HAJI [a racist slur for Iraqis used by U.S. soldiers] DIE.‘"

Google the Express story. It gets even uglier.

Blackwater‘s hired goons are exempt from prosecution. So, apparently, are real soldiers. Atrocity after atrocity goes unpunished or rewarded with a slap on the wrist.

Specialist Jorge Sandoval, 22, was acquitted of murdering two Iraqis, one on April 27, the other on May 11 near Iskandariyah, south of Baghdad. However, a military court-martial found him guilty of planting detonation wire on the first victim to make him look like an insurgent. If he was innocent, why did he try to cover up the shooting?

Specialist James Barker, 23, of the 502nd Parachute Infantry Regiment of the 101st Airborne Division, based in Fort Campbell, Kentucky, admitted that he held down a 14-year-old Iraqi girl in 2005 while another soldier raped her, then shot her several times in her Mahmudiya home. He dowsed her with kerosene and set her on fire. According to CNN, "he was not sure if he penetrated the girl, because he was having trouble getting an erection." He and five fellow soldiers also murdered her parents and her 7-year-old sister. Thanks to a plea bargain, said The New York Times, "he could be released on parole in 20 years."

The same crime committed in the U.S. would earn life in prison, or the death penalty.

A Marine Staff Sergeant charged in the massacre of 24 people in Haditha, The New York Times reports, will not face murder charges because investigating civilian deaths isn‘t a military priority. "Prosecuting the Haditha case has posed special challenges because the killings were not comprehensively investigated when they first occurred," says the Times. "Months later, when details came to light, there were no bodies to examine and no Iraqi witnesses to test."

(Ted Rall is the author of the new book "Silk Road to Ruin: Is Central Asia the New Middle East?," an in-depth prose and graphic novel analysis of America‘s next big foreign policy challenge.) Next: ONWARD, CHRISTIAN PANDERERS