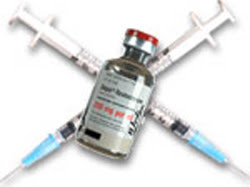 Steroid use is on the rise among law enforcement officials, alarming activists who say this has caused an increase in incidents of police abuse and brutality. Video.

... called the Sonoma County sheriff and a captain answered the phone. He said that the sheriff was unavailable. So I told the captain that I had done a Google search that shows police departments around the country were being busted by the feds for steroid abuse.

I told him the search terms and I could sense the panic in his voice. I told him that the searches reveal Boston police being busted by a federal grand jury investigation. Dallas also came up with the search and too many others to list.

Now I only went over the first ten results of the first search term and twenty of the second. When I got to the one about president Bush talking about steroid abuse in a State of the Union address, I stopped. After all, Bush was talking about steroid abuse in sports. Maybe he should have been a bit more specific and included law enforcement. You know .... the people that enforce the laws against such things as drug abuse. ...