The Media War Against "Conspiracy Theorists": The World According to CIA Mockingbird Richard Miniter 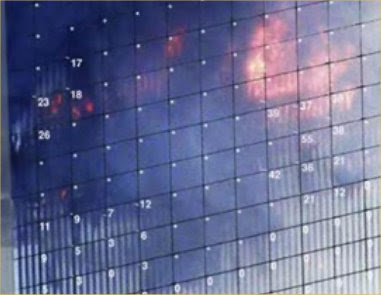 " ... Richard Miniter is the author of two New York Times bestselling books, Losing bin Laden and Shadow War, and is an internationally recognized expert on terrorism. ... " 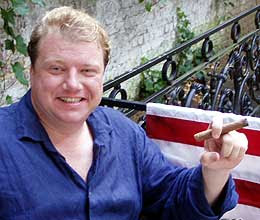 This man thinks that 9/11 Truthers are "idiots." To look at Miniter, you might think that the shoe fits in his case, but he's actually a very cerebral author, and we are mostly clownish, lowbrow, idiotic, nogood nothings compared to him. Appearances are deceptive. He's not the idiot he seems to be - it's us ... we're also grossly obese and smoke too much ...

A majority of Americans say it is “likely” that their government knew about the September 11 attacks in advance and ignored the warning, a recent poll revealed: more evidence that what were once considered loony fringe theories have penetrated the U.S. mainstream. Richard Miniter examines the roots of the claims and debunks them.

Sixty-two percent of Americans believe it is “very likely” or “somewhat likely” that federal officials knew about the 9-11 attacks in advance and ignored this lifesaving information, according to this recent New York Post report.

The Post, in its typically calm manner, opines “Idiots in the majority.” ...

Why does this conspiracy theory linger? Historian Joseph E. Persico argues that it is simply human nature. Persico is an acknowledged expert on the last surprise attack on the American homeland, the Japanese assault on Pearl Harbor. He notes that President Franklin Delano Roosevelt had some inkling of Japan’s dark designs before the December 7, 1941 attack. ... 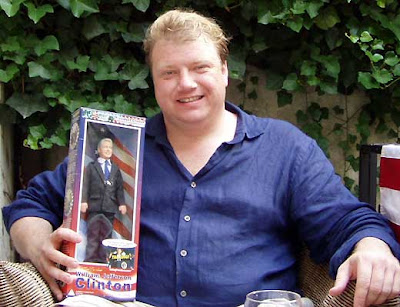 Other articles by Richard Miniter:

According to Richard Miniter, an American investigative journalist who is an expert on Islamic terrorism, the West is capable of winning the war on terror. In fact, he thinks it is winning. Miniter, who is a weekly guest on Fox News, has travelled extensively all over the globe and was in Brussels early this week on his way to Afghanistan. The Brussels Journal interviewed him.

Paul Belien: Rich, you have written two bestselling books about terrorism so far. The first one, “Losing Bin Laden,” is a chronicle of what happened under Bill Clinton’s presidency and the second one, “Shadow War,” is about the war on terror during the first term of George W. Bush. In this last book you argue that America is winning the war on terror. Europeans find this hard to believe. Given the London bombing early this month, do you still think that we are winning the war on terror?

Rich Miniter: Yes, I think that on balance we are winning, I think this for several reasons. Since 9/11 more than 5,000 al Qaeda members have been killed or captured in 102 countries. The war on terror is a lot larger than the war in Afghanistan and Iraq. It occurs on a global stage. A tremendous number of terrorist plots by al Qaeda and its organisations against Western targets have been forded. A plan to bomb the U.S. Embassy in Paris was prevented, as well as an attempt to sink U.S. and British war ships in the Strait of Gibraltar by ramming zodiac inflated rafts loaded with bombs into the hulk of these ships. In fact, the intelligence that led to the unravelling of these plots came from prisoners held in Guantanamo Bay, Cuba. That alone, I think, justifies holding those prisoners. ... 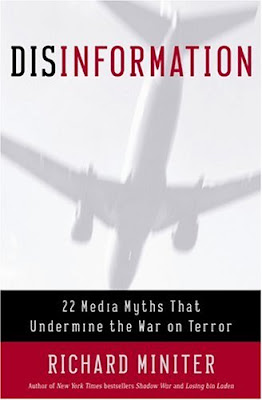 He has been published in The New York Times, The Washington Post, The Wall Street Journal and The Christian Science Monitor, as well as leading magazines including The Atlantic Monthly, The New Republic and Reader's Digest. His published work has been featured in policy and political magazines including The American Enterprise, National Review, Reason, and Policy Review, among others. In addition, his articles have appeared in newspapers throughout Europe, Asia and Australia.

After graduating from Vassar College in 1990, Miniter worked for the American Spectator, became a policy analyst at the Competitive Enterprise Institute and was a senior writer at Insight, a magazine published by the Washington Times.

Miniter made two forays into public broadcasting. He was associate producer of the PBS series Technopolitics, a weekly program covering the politics of science, technology and the environment from 1991 to 1993. In June 1996, he was executive producer of Enterprising Women, a national weekly public radio series devoted to women executives and entrepreneurs. The series, distributed by the National Public Radio Satellite System, was hailed as "inspirational" by CNN and described as "the radio equivalent of the female Forbes magazine" by the New York Post. It was hosted by Christy Brown. Despite a loyal audience estimated at five million and carriage in eight of the top ten markets, the series ended in June 1997 due to sponsorship difficulties.

From 1996 to 2000, Miniter reported for newspapers and magazines on assignment from Western Europe, sub-Saharan Africa, Southern Africa and Southeast Asia. He traveled with rebels into war zones in Uganda, Sudan and Burma and along smugglers' routes in Laos, Thailand and Cambodia.

While at the Journal, Random House published Miniter's first book, The Myth of Market Share. ... Executives should not pursue mergers based on size alone and regulators should not bother to stop them.

The Myth of Market Share has been translated into Chinese, Hebrew, German, Japanese, Italian, and Spanish. The Washington Post said it was a "must read for business executives."

Shortly after the September 11 attacks, Miniter left the Journal to join the investigative reporting team of the Sunday Times (of London), Britain's largest quality paper. Miniter co-wrote a four-part series, "The Road to Ground Zero." The series won first prize by the International Consortium of Investigative Journalists. 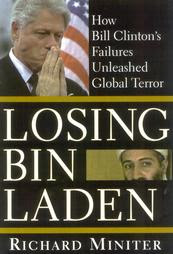 In early 2002, Miniter was contracted to write a book that became Losing bin Laden. He would spend the next 18 months reporting from Khartoum, Cairo, Frankfurt, Hamburg, London, Paris and Washington to offer an authoritative account of the bin Laden menace during the Clinton years. It became a New York Times bestseller, peaking at no. 9 in September 2003. Losing bin Laden was cited on NBC's "Meet the Press" by host Tim Russert. The book was also praised in columns by George F. Will, Steve Forbes and Robert Novak.

Miniter's next book was drawn from on-the-ground reporting in Iraq, Kuwait, Egypt, Sudan, Hong Kong, Singapore and the Philippines. Shadow War: The Untold Story of How America is Winning the War on Terror became his second New York Times bestseller, debuting at no.7.

Miniter's latest book is entitled Disinformation: 22 Media Myths That Undermine the War on Terror. Based on exclusive interviews and official documents, the book challenges many widely-held notions: that Bin Laden was trained or financed by the CIA in the 1980s, that Halliburton profiteered in Iraq, that profiling Arabs at airports would stop terrorism, and that the U.S.-Mexico border is an open door for Al Qaeda.

Miniter appears regularly on television and radio to discuss al-Qaeda and global terrorism. He has appeared on every major American cable news network including CNN, C-Span, Fox News and MSNBC—nearly 200 times in the past three years. He has been featured on "Late Edition with Wolf Blitzer," "The O'Reilly Factor," "Hannity & Colmes," and "Special Report with Brit Hume," among others.

He has been a featured guest on more 1000 talk radio shows, including almost every top ten program, from Rush Limbaugh to Laura Ingraham. He has often appeared on overseas television networks including ABC (Australia), Al Jazeera (Qatar), CBC (Canada), ITV and SkyNews (U.K), LBC (Lebanon), and RAI (Italy), and radio programs in Australia, Belgium, France, Ireland, and Italy.