And most Americans are deliberately ignorant enough to fall for it. Heavy scapegoating and more wrong-headed, belligerent, divisive, jingo-dialectical chest-beating ahead for liberals ... but maybe if we ignore them, the real nazis will just go away ... - AC 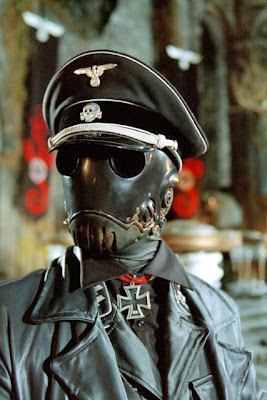 PS: I have a Nazi robot

During the week of October 22-26, David Horowitz and his Freedom Center held a series of events at 100 campuses for Islamo-Fascism Awareness Week, intended to counter standard academic nitwitery about the war on terrorism ("America is evil," "We brought it on ourselves," "9/11 was a Republican conspiracy"). Admirable though this was, attention must be called to an even more imminent threat.

By the authority vested in me (by myself), I hereby designate the week of November 5th Left-Fascism Awareness Week -- a time to consider the clear and present danger to free speech emanating from the left, from academic Jacobins to Hillary, Harry and Nancy. he thud of jackboots resounds in several recent incidents.

During Islamo-Fascism Awareness Week, Horowitz got to experience fascism first hand -- but not the Islamic variety.

On the evening of October 24, the former New Left leader tried to address an audience of over 300 (including students, faculty and the general public) at Emory University. His speech was sponsored by the Emory chapter of the College Republicans. God forbid a university itself should sponsor a controversial speaker on the right.... Continued
Posted by Alex Constantine at 10:31 AM