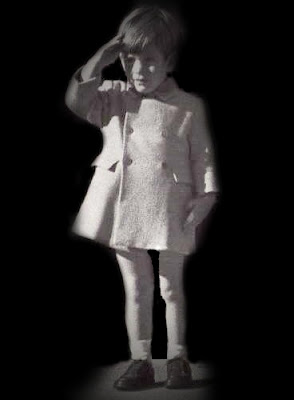 AC Note: The murder of John Kennedy was planned and overseen by Charles Willoughby/Weidenbach, who laid a maze of false trails leading to Dallas by manipulating individuals and groups like pieces on a Parker Brothers game board, each performing self-implicating acts or making suspicious statements that linked them to the assassination. The strategy involved look-alikes. After the assassination, anyone investigating the self-implicating acts would find himself either pursuing a false trail (riding a bus to Mexico), or utterly lost in the maze of seemingly unresolvable cover stories (Mafia, Castro, Soviets ... there were false trails laid down for each).

The American people have been herded into the second category.

The same strategy has been used in CIA/military intelligence hits over the years. One of those "suspicious" trails to Dallas - complete with an Oswald look-alike - was recently discovered by the media. But no effort is made to deconstruct the Willoughby strategy and clear up the widespread confusion that has spread like a fog over the assassination. The latest "revelations" will only add to the mass confusion unless this is done. The Willoughby strategy has to be laid out for the public to comprehend, and the false trails distinguished from the actual murder plot.

BTW, theories that claim Kennedy was murdered because he planned to pull out of Vietnam are bogus. Prouty was wrong. But then Prouty was published by Willoughby's Liberty Lobby, an obvious conflict-of-interest that rules him out as a source on the assassination, IMHO.

Rather, the assassination plot overseen by Willoughby WENT INTO MOTION THE MOMENT KENNEDY WAS ELECTED PRESIDENT. This is verified by following the movements of Oswald and the other chess pieces in the timeline.

John Kennedy was never meant to live in the White House. That alone was the reason the fascists took him out. The job was intended for his Republican opponent, and all obstacles were cleared over the bloody course of the next five years to put Tricky Dick in the Oval Office.
•••••••••••
New Revelations in Kennedy Assassination: Information over holiday weekend turns an old story in new directions

November 24, 2007 — A new report from a Chicago ABC affiliate and several other developments has shifted theories concerning the assassination of former President John F. Kennedy in new directions.

Since the day of the assassination of John F. Kennedy, some 44 years ago, the nation has been divided over the concept that some form of conspiracy to murder Kennedy took place. Analysts and experts have examined recorded sounds, tested bullets shot from distances through various objects, and looked at thousands of pieces of evidence, all in pursuit of exposing a conspiracy involving more than the one known gunman, Lee Harvey Oswald, or to vehemently counter the numerous theories which have grown up around that notion.

Many of the conspiracy theories have centered on individuals and locations in the South. Specifically, Miami, Tampa, New Orleans, and of course Dallas, have all played roles in theories set forth by those who believe that Lee Harvey Oswald did not act alone in murdering America’s 35th president.

Thanksgiving 2007 happened to fall on the 44th anniversary of the Kennedy assassination and thus brought out the usual set of editorials and articles remembering the tragedy and debating the well-known issues surrounding the story. But on this particular anniversary of Kennedy’s death, three unrelated news stories or broadcasts raised some eyebrows.

This weekend, ABC News.com (based on the work of its Chicago affiliate ABC7, and its investigative reporter, Chuck Goudie) revealed that the only African-American member of Kennedy’s Secret Service team, 72-year-old Abraham Bolden, has come forth to confirm that in early November of 1963, about three weeks before the shooting in Dallas, the Secret Service learned of a known Kennedy critic living in Chicago and arrested him briefly for having in his possession a high powered rifle and a revolver and posing as a threat to Kennedy.

Kennedy was to travel by motorcade to a college football game at Chicago’s Soldier Field. The president’s trip was cancelled at the last minute, apparently for security reasons, although the public was told he had a cold.The man arrested, Thomas Vallee, like Lee Harvey Oswald, was an ex-Marine with expertise as a marksman. Pictures of the two men even looked somewhat alike. What made this report more interesting was the former agent’s revelation that the FBI received a tip from a hotel manager at roughly the same time that a group of Cuban nationals, staying at the Chicago hotel, had high powered rifles with telescopic lenses and a publicly published copy of the route the Kennedy motorcade was to take, in their room. The report implies that the route would have passed the hotel where the Cubans were staying.

The evidence, according to Bolden, was seized; the Cuban nationals fled and were never found. The hotel room, according to the former agent, was never dusted for fingerprints and the case file was lost. Bolden said that none of the information about Vallee or the Cubans was forwarded to federal officials in Dallas prior to Kennedy’s visit there just twenty days later.

More disturbing was the fact that Bolden, a black man who had been hand picked by Kennedy to serve in a prestigious and virtually all-white profession, apparently attempted to give the information to members of the Warren Commission formed to investigate the Kennedy assassination. Not only, according to Bolden, did they refuse to take the information, he was at about the same time accused of soliciting a bribe from a counterfeiter and sent to jail for six years. According to the interview, conducted by the ABC affiliate in Chicago, Bolden contends that this was a set-up to silence him.

“It would truly be ironic if the first African-American to serve on a Presidential security detail was in fact a hero whose race and information made him an easy mark to put down and lock away back in those days” said an individual closely related to the civil rights movement in the 1960s who preferred not to be identified.

Perhaps a more specious revelation came this last week from a publisher of rare books who claimed on FOXNEWS that he has published the last book written by the late President Gerald Ford. Ford’s “last book” reportedly says that the CIA either withheld or destroyed evidence related to the Kennedy murder according to the publisher. The press release issued by the publisher gives the strong impression that Ford authored the book.Whether Ford authored the entire book seemed unclear. A casual examination (the book could not be obtained in time for this article) through on-line research gives the impression that Ford may have written a forward, but the substance of the book may be a reprint of the Warren Commission Report, a Commission upon which Ford served and whose conclusions he reportedly stood by until his death.

The book was not listed on Amazon.com as of this weekend and the most our research could find was an what appeared to be Ford’s name on the cover of the book indicated as having written an introduction to the Commission’s findings, in which he reportedly stood by the Warren Commission Report but was critical of the CIA for having either hidden or destroyed potential evidence related to the assassination. There was no evidence to suggest that Ford did not write the introduction to or some segment of the book. However, there is also no evidence that Ford in any way repudiated the findings of the original report.

Finally, a PBS documentary shown in the South this past week related to news coverage of the Kennedy assassination caught the attention of many viewers. The documentary showed the full local television coverage of Kennedy’s arrival in Dallas and departure as he started his fateful ride in the motorcade.

Many viewers noted that just as the presidential limo was leaving the airport, the two Secret Service agents who were to ride on the back of Kennedy’s car were, at the very last second, removed from their posts. One agent was clearly agitated for being removed from his position, one that would have been right behind President Kennedy and which possibly could have saved his life.As it turns out, this aspect of the assassination has also been examined and the sequence was actually posted on YouTube years back. Apparently the issue in this instance is that the top Secret Service officials said Kennedy ordered that the agents stay off the car, while Kennedy’s aides say it wasn’t so and that he never interfered with his Secret Service protection.

Based on our research, neither claim has ever been definitively confirmed. However, the broadcast on public television gave many their first full look at the incident.

As time marches on, more is revealed concerning the events of November 22, 1963. And just as there are those who believe new revelations only confirm their beliefs in a conspiracy, others, such as author James Piereson, writing in this weekend’s Wall Street Journal, indicate a belief that Oswald acted alone, not based on any issues related to the civil rights battles occurring in the South at the time, but more out of sympathy for Cuba.

Pierson’s book on the subject will likely receive strong criticism from some corners for its suggestion that the mood of the South in 1963 was not the motivating factor in Kennedy’s murder. Dallas was undeniably viewed as hostile territory for Kennedy, even by its own local news accounts at that time.The scenario in Chicago certainly has many of the elements of numerous assassination theories which have centered on locations in the South, usually with a tie to some Cuban-related groups.

Even the failure to follow up on the threat or pass the information on to the Secret Service in Dallas follows a similar path already set forth with regard to Oswald as established by the official inquiries. Such issues, some have argued, point more to theories related to either direct involvement of U.S. government officials or severe incompetence overlooked by the Warren Commission.

Again, a source of endless debate.If nothing else, this “Northern Turn” of events takes all theories out of the exclusive territory of the South. Perhaps it will some day lead to other significant revelations. More than likely it will simply fuel the argument over conspiracy versus non-conspiracy. In either case Bolden’s statements add to the list of locations where an alleged but foiled or aborted attempt on Kennedy’s life took place.

http://www.southernpoliticalreport.com/storylink_1124_47.aspx
Posted by Alex Constantine at 12:17 AM


President Kennedy "Men of Courage: Four Principles" speech, JFK assassination research links, and my witnesses interviews, contributions, and my discoveries for your considerations.....