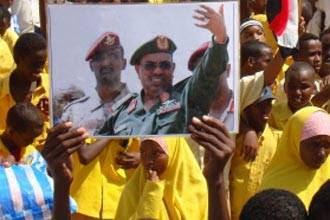 Bashir is wanted by the ICC for war crimes and crimes against humanity
DUBAI (AlArabiya.net)

The Arab League rejected a request from the International Criminal Court to implement an arrest warrant against Sudan's President Omar Hassan al-Bashir, clearing the way for the leader to attend an Arab Summit in Qatar later this month, Sudan official news agency SUNA reported on Tuesday. ... Earlier this month ICC prosecutor, Luis Moreno-Ocampo, issued an arrest warrant for Bashir on seven counts of war crimes in Darfur and crimes against humanity, which include murder, rape and torture. ...