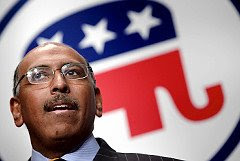 Republican National Committee chairman Michael Steele has been having some interesting conversations with God about the criticism he's gotten lately from his fellow GOPers.

"I just pray on it," he told GQ Magazine about the flak, some of it inspired by his comment that the GOP needs to go in a more urban, "hip-hop" direction. "And I ask God, ‘Hey, let me show just a little bit of love, so I absolutely don't go out and kick this person's ass.'"

Steele, a former seminarian, may soon be praying to keep his job, too, after other comments he made in the interview seemed to challenge Republican orthodoxy on several issues.

Asked if he thought women had a right to an abortion, he said, "Yeah. Absolutely." ...