Ku Klux Klan is Still Alive and Well in Florida 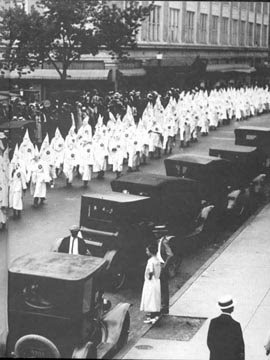 ... The number of organizations in our state is astounding, but they have also changed their name. Many call themselves "knights." The terms "Klansman" and "skinhead" are beginning to wane.

Now don't get me wrong. I was born in the Southern Delta country and am a rebel at heart. I am as overflowing with pride in my Southern heritage as any fellow can be, but have a hard time identifying with these guys as they offer nothing but vengeance and retribution of days long ago.

As the years go by I find it is amazing that I lived in an area where they were predominate in all the towns across the South. It was part of the political system. I knew it and so did everybody else. You fell in line or you were subjected to the wrath of an evening visit.

How prevalent is the Klan in our home state? Get ready for a shocker.
The organizations and their towns are listed below.

And yes, we have our very own "den" in our small coastal territory. Located in the hamlet of McDavid just north of Melton, Florida, sit the "Bayou Knights." I know nothing about them, but nevertheless they are listed in the KKK roll call.

The only incident in Walton County that harkens back to those dark days of vigilante justice that might have included the Klan was the lynching of a black man in Freeport in the late 1800s. True, he was caught in the act of murder and robbery with an accomplice, but the agitated crowd wasted no time with the rule of law. It smacks of the immediate justice the Klan was so well known for in the South.

Other Walton County incidents are spray painting and the destruction of church and public properties about the county that may be misguided juveniles, or juveniles guided by "a cell" of knights, skinheads or Aryans - or whatever they call themselves.

Important today in Florida is education. Most Klan members are universally school dropouts who blame society for their problems and not themselves. Be they black, white, Hispanic or Chinese, every race has its own form of hate Klanism. You see it in streets and on TV every day.

To see the southern KKK in action go to National Aryan Knights of the Ku Klux Klan on the Internet and click picture box. It shows many photos of a crawfish boil and some down-home serious nighttime cross burning.

What I can't understand is why their robes don't accidentally flame up more often at those shindigs.

Chick Huettel is a long-time Walton County resident and former owner of Bayou Antiques. He is a member of a number of local organizations including the Emerald Coast Archeological Society.
Posted by Alex Constantine at 10:54 AM