Profiles of America's Beloved TV Celebrities (44): Gloria "Hold Me, Thrill Me, Kiss Me" Estefan & the CIA

Wiki: "Her family was forced to flee the country to Miami, Florida, during the Cuban Revolution. A few years after they moved, her father joined the US military during the Vietnam War. ... "
http://en.wikipedia.org/wiki/Gloria_Estefan 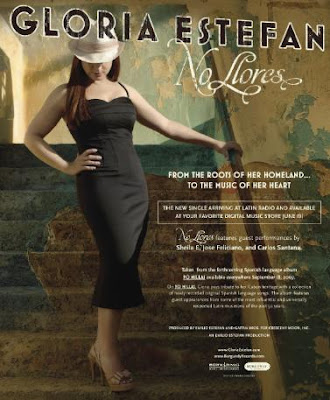 Gloria Estefan Turned Down Offer To Be a CIA Spy
By Kyle Munzenrieder
Z List
Mar. 4 2009

Had the tides of fate shifted slightly, Gloria Estefan, Miami's official #1 celebrity resident, may have lived a life full of espionage and shadowy secrecy instead of world wide tours and "Conga."

In an interview on Telemundo's Al rojo vivo with MarÍa Celeste Arrarás, the singer reported that while working in customs at MIA, she was approached by the CIA about becoming a spy: "They realized that I was someone who could pass as a regular person without raising any eyebrows. So the CIA approached me and wanted me to train in their Atlanta headquarters."

When José and Gloria Fajardo's daughter, gloria, first opened her eyes, it was Havana,Cuba, circa 1957 that met her gaze. unfortunately, that image wouldn't last long enough to live on in her mind. Her father, a supporter of Bautista, moved the family to Miami when Gloria was only sixteen months old, leaving behind a homeland she would later use music to evoke when memory failed. Immigrants in a country that considered itself burdened with an influx of Castro-inspired expatriots, the Fajardo family lived in abject poverty behind the Orange Bowl, in one of Miami's Cuban ghettos.

Hearing duty call, Gloria's father enlisted to take part in the Bay of Pigs invasion. Captured and imprisoned, José spent over a year in Cuba as a p.o.w.. Sad though it was, the Fajardo situation was not unique. "All the men were gone," recounts gloria, "all the mothers and kids were living together."

Like her father, gloria felt the call of duty and responded by beginning her amateur singing career, singing Cuban songs to the women whose husbands had gone off to war. At such a tender age, she could not know that, one day, her music would be banned in Cuba by Fidel Castro. When José returned from Cuba, he was transferred to Texas and the Fajardo family moved once again. Gloria's sister, rebecca, was born and Josée was sent to vietnam. ...