San Diego Jet Crash Revisited: The Pilot was Instructed to Fly Over a Populated Area Despite Known Engine Problems 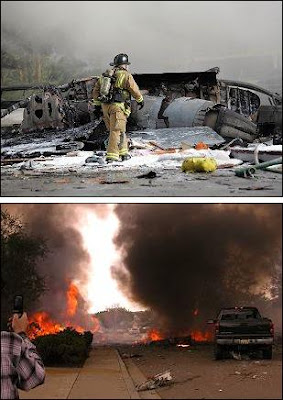 Three entirely different versions of the same story: In the first, from NBC San Diego, the pilot is instructed "to land at NAS North Island," safely offshore, and inexplicably rejects this direction, heads inland and crashes after both engines cut out. But in an AP report published today at 12:34 pm, the pilot makes the decision to fly over a residential area of San Diego after an "offer" to land at the tip of the peninsula (what happened to the island?) It is explained in the second story that the pilot refused directions to fly safely over the San Diego Bay. This leaves the false impression that "pilot error" was responsible. In the third account below, also from the AP and posted at 3:07 pm, we find another explanation altogether - four Marines "directed" the pilot to fly over a populated area, despite known engine problems. "Pilot error" was the general's attempt to deflect responsibility for the crash away from the Corps, but the FAA tapes and the Marine's own disciplinary board contradict him. 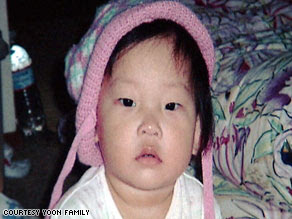 Grace Yoon, one year old, was killed after the jet slammed into her home

One of the homeowners from the La Jolla neighborhood who lost her home in the crash talked Tuesday about the release of the tapes and what she’s not getting from the military. ...

Three members of the military visited Wu at home this morning including a two-star general.

They discussed the findings from the recording with Wu and her family.

According to Wu, the pilot was instructed to land at NAS North Island. Wu said one of the military controllers guiding the jet in had to leave the discussion and a second controller stepped in. Wu said she was told the second controller didn’t know the jet’s second engine wasn’t getting fuel.

While she’s not well-versed in military policies and practices, Wu said she feels she now knows what caused the crash.

She’s more worried about the future because she’s not getting the financial help she needs.

Wu has received $2200 from the U.S. military right after the accident to help her replace some of the items lost in the crash. ...

The pilot of a malfunctioning Marine Corps jet that crashed in a San Diego neighborhood and killed four people in December was offered a chance to land minutes earlier on a runway at a base with an approach over water.

Recorded communications with air controllers reveal that the pilot at least twice was offered a chance to land at Naval Air Station North Island in Coronado -- a base on a peninsula with a flight path from the south over water.

But Federal Aviation Administration tapes show the pilot decided to fly the jet that had lost one engine to an inland Marine base on a route over the University City neighborhood.

The Dec. 8 crash incinerated two homes and damaged three others.

Military officials have said the F/A-18D jet had a rare double engine failure.

Service officials told members of Congress today that four Marine Corps officers at Marine Corps Air Station Miramar near San Diego have been relieved of duty for directing the F/A-18D Hornet to fly over the residential area.

The jet was having engine problems. Officials said the pilot should have been told [compare with the second story above] to fly over San Diego Bay and land at another base that sits on the tip of a peninsula. ...