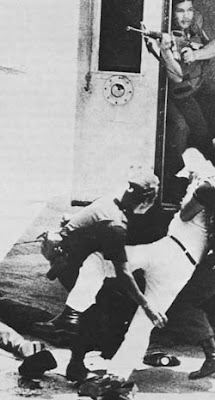 Aquino, the opponent of dictator Ferdinand Marcos, was gunned down at Manila airport as he was returning from U.S. exile. The assassination triggered massive protests culminating in Marcos' 1986 ouster and the election of Aquino's widow as president.

The current president, Gloria Macapacal Arroyo, on Wednesday commuted the sentences of the last 10 convicted murderers. They were freed Wednesday.

Her spokesman, Cerge Remonde, said the move was "procedural" and not political, because a convict is eligible for pardon and parole after serving a portion of his sentence. In this case, he said the former soldiers had been jailed for 26 years.

Sen. Benigno Aquino III said his family had not been given justice and suggested Arroyo was hitting back at his mother, former President Corazon Aquino, for joining opposition calls demanding Arroyo step down because of vote-rigging allegations.

"We are saddened to find that the memory of a man who gave up his life for this country has not been spared from this administration's politics of petty vengeance," Sen. Aquino said in a statement.

Former President Aquino, 76, who has been battling colon cancer, refused to comment. She stepped down in 1992, but four years ago asked Arroyo to resign over allegations she cheated in the 2004 presidential elections.

Arroyo has denied the charges, but the relationship between the two powerful women has been tense.

A national icon, Aquino was shot to death on Aug. 21, 1983, moments after soldiers escorted him from a plane onto a tarmac.

Sen. Aquino said if the men were innocent as they claim, they should have ensured that his father received first aid as soon as he was shot. He referred to the eyewitness account of a police officer who said the team was asked to ensure that his father was dead.

The men were acquitted in their first trial under Marcos. The court ruled Aquino was slain by a supposed communist hit man, Rolando Galman, who then was killed by security guards.

After Marcos was ousted, the Supreme Court nullified the acquittals and ordered a new trial.

In 1987, a court convicted the 10 soldiers of killing both Aquino and Galman and sentenced them to 40 years in prison. Six other soldiers were also convicted. Three died in prison and three were pardoned.

The trial failed to establish the mastermind, but speculation has long focused on Marcos, who died in exile in Hawaii in 1989.

In a nation where people are confident of its laws and institutions, pardon and mercy comes naturally without shame and remorse. But in a nation where the laws are selectively enforced perceived as tool of the ruling minority elite faction to perpetuate themselves in power and the institutions bastardized to unrecognizable level, people ought not just be ashamed of it but respond with righteous indignation and outrage.