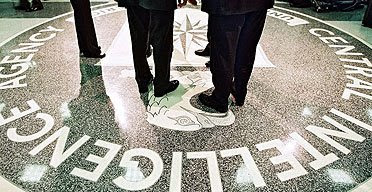 In a major expose, the Los Angeles Times recently revealed that the U.S. has quietly forged a close intelligence partnership with Sudan despite the government's role in the mass killings in Darfur. The Sudanese government has since publicly confirmed it is working with the Bush administration and the CIA. Eight months ago, former Secretary of State Colin Powell accused the Sudanese of carrying out a genocide in Darfur. Already 180,000 have died in the region from fighting or hunger.

But relations appear to have since changed -- for the Sudanese government's benefit. One senior Sudanese official the LA Times that the country had achieved "complete normalization" of relations with the CIA. The Times reported that the CIA sent an executive jet in late April to Khartoum to ferry the chief of Sudan's intelligence agency to Washington for secret meetings sealing Khartoum's sensitive and previously veiled partnership with the administration. The Sudanese intelligence chief - Major General Salah Abdallah Gosh - has been accused by members of Congress of directing military attacks against civilians in Darfur. He also had regular contacts with Osama bin Laden during the 1990s. ...

October 30, 2007 (KHARTOUM) — Sudan’s spy chief revealed that his government has maintained strong relationships with US law enforcement agencies including CIA and FBI as well as the US Department of Defense.

Salah Gosh, the head of Sudan’s National Security and Intelligence Service, told the Al-Ahdath daily from Libya that the cooperation with the US “helped avert devastating measures [by US administration] against Sudan”.

The intelligence cooperation between the US and Sudan was publicly exposed in 2005 when the Los Angeles Times disclosed that the CIA sent a jet in April 2005 to Khartoum to ferry Gosh into Washington for meetings on nabbing terror suspects in East Africa.

The report caused outcry among human rights groups in the US who allege that Gosh has orchestrated human right abuses in the war ravaged region of Darfur. The widespread criticism forced the US administration to subsequently deny Gosh entry to seek medical treatment for heart condition.

The same newspaper revealed in June that Sudan has secretly worked with the CIA to spy on the insurgency in Iraq despite the strained relations with Washington over the Darfur crisis.

International experts estimate 200,000 people have died in the Darfur conflict, which Washington calls genocide a term European governments are reluctant to use.

Darfur activists accused the Bush administration of refusing to take more forceful steps against Khartoum to avoid jeopardizing the intelligence cooperation. US officials denied the allegations saying that the counterterrorism cooperation has not prevented Washington from taking the lead on the Darfur crisis.

Gosh said that Sudan’s intelligence services has ‘excellent’ relations with its counterparts in US, UK, France, China, India, Iran and Spain. He added that Sudanese Intel officers have been receiving training in these countries without elaborating.

However the spy chief said that the cooperation with CIA “is not at the expense of Islamic public opinion in Sudan” and spoke of differences with US spy agency over combating terrorism.

Gosh’s statements brings back into spotlight the nature of the intelligence relationship between the US and Sudan. Sudanese officials have been making contradictory statements on the extent of their cooperation.

Last July the Sudanese president Omar Al-Bashir told reporters that cooperation with CIA was on a limited basis only suggesting that news reports have inflated the magnitude of the relationship.

A spokesman for Sudan’s National Security and Intelligence Service told the government sponsored Sudanese Media Center (SMC) that cooperation with CIA is taking place within the Sudan’s boundaries only.

But Sudan’s former foreign minister Mustafa Ismail speaking to Los Angeles Times in 2005, said that his government “already has served as the eyes and ears of the CIA in Somalia”.

Analysts speaking to Sudan Tribune said that the conflicting statements show that Khartoum is concerned that it is increasingly appearing to be acting as a proxy for the CIA which may put it at odds with its Islamic popular base.

Sudan’s president has routinely criticized the US for putting pressure on his government over the Darfur crisis and accused Washington of trying to control its resources.

Last May the US president George Bush ordered stiffened sanctions on Sudan that will bar 31 companies controlled by the government from doing business in the U.S. financial system as well as sanctions on four Sudanese individuals, including two senior Sudanese officials and a rebel leader suspected of involvement in the Darfur violence.