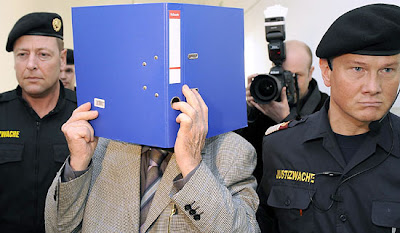 ST. POELTEN, Austria: A man accused of imprisoning his daughter in a basement for 24 years and fathering her seven children pleaded guilty Monday at the opening of his trial to charges of incest, but insisted he was not guilty of killing her newborn son or enslaving her.

Josef Fritzl, 73, wore a mismatched suit and hid his face behind a blue file folder as a judge began the proceedings under heavy security here 65 kilometers, or 40 miles, west of Vienna. Mr. Fritzl faces up to life in prison if convicted of murder. Incest, by contrast, is punishable by up to one year in prison. A verdict is possible as soon as Thursday.

Mr. Fritzl pleaded guilty Monday to incest and false imprisonment, but only partially guilty to charges of coercion and rape. He pleaded not guilty to negligent homicide and enslavement.

He was almost inaudible as he gave the judge his name and other personal details. He eventually removed the folder from his face, but sat still in the dock, clasping his hands together and staring straight ahead.

His voice breaking at one point, Mr. Fritzl briefly recalled his childhood and said life with his mother was "very difficult." Asked if he had friends, he said, "No."

The authorities say Mr. Fritzl imprisoned and repeatedly raped his daughter, Elisabeth, now 42, for 24 years in a cramped and windowless dungeon he built beneath the family home in the western town of Amstetten. Investigators say DNA tests show he fathered her six surviving children.

Another child died in infancy, which prompted the murder charge. Prosecutors contend the baby boy might have survived if Mr. Fritzl had arranged for medical care.

In her opening statement, a prosecutor, Christiane Burkheiser, accused Mr. Fritzl of repeatedly raping his daughter in front of the children, and said the ailing newborn he failed to save died two and a half days after it was born. "That's murder by neglect" or negligent homicide, Ms. Burkheiser said.

The prosecutor said that Mr. Fritzl once punished the young woman by shutting off electricity to the dungeon and that he forced her to spend the first part of her captivity in a tiny space that lacked either a shower or warm water.

But the worst parts of the woman's imprisonment, Ms. Burkheiser said, was that "there was no daylight" and that the air was moldy and stale.

Ms. Burkheiser said Elisabeth was "broken" by Mr. Fritzl's actions and the uncertainty of her fate and that of her children. Three of the children grew up underground in Amstetten. The other three were brought upstairs to be raised by Mr. Fritzl and his wife, Rosemarie, who believed they had been abandoned.

Mr. Fritzl's attorney, Rudolf Mayer, appealed to the jury to be objective and insisted his client was "not a monster," saying his client even brought a Christmas tree down to his captives, whom he considered a second family. "If you just want to have sex, you don't have children," Mr. Mayer said. "As a monster, I'd kill all of them downstairs."

Mr. Mayer said he had no particular strategy for Mr. Fritzl's defense. He said that his client regretted his actions.

A spokesman for the court, Franz Cutka, said Mr. Fritzl's partial admissions of guilt on the rape and coercion counts would become clearer over the course of the proceedings. "The accused will have to explain exactly what he means," Mr. Cutka said.