Rabbi Accused of Molesting Daughter Cross-Examines her at Trial 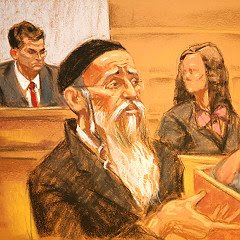 A rabbi charged with molesting his daughter subjected her to hours of cringe-worthy cross-examination Tuesday in Brooklyn Federal Court.

Israel Weingarten, 59, who chose to represent himself against charges that could send him to jail for 20 years, rambled on all afternoon as his daughter looked away, wiped tears and struggled to understand what he was asking.

"Do I have to answer?" the now-27-year-old asked Judge John Gleeson in a trembling voice before gathering the strength to shoot back when asked why she didn't complain sooner.

"My feeling of your molesting me was at most fear and blackmail and years of torture," she said, eyes widening as she wiped tears off her cheeks. "Fear because you hurt me because I told my mother. Didn't I get hit enough?"

The girl, who broke with her father's ultraorthodox community after allegedly being abused by him from ages 9 to 16, explicitly described reprehensible acts in public with words she was once forbidden to say even in private.

Some jurors glared at Weingarten, others wiped their eyes when she told of years of abuse and shame as her father shuffled her between homes in New York, Belgium and Israel.

"You could ask me, I'm not trying to fight you," Weingarten said once after she failed to understand a question.

An exasperated Gleeson eventually cut him off.

"Mr. Weingarten, if anybody is going to admonish the witness it's going to be me," he thundered. "You have created a fairly untenable, horrific situation by deciding to represent yourself.

"Now, I'm not sure where this crossexamination is going, but I know you are not going to lecture this witness."

The cross-examination continues Wednesday.
Posted by Alex Constantine at 9:13 PM