Global Empire - Religion and money, the way to complete power – or not? 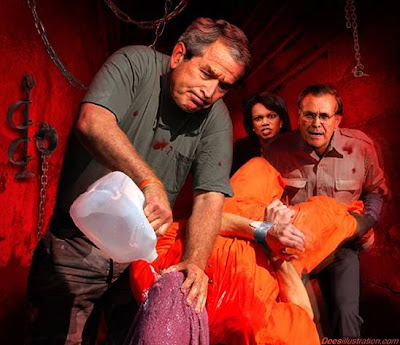 " ... One thing is certain. The raving lunatics will be back. Nothing can stand in their way, not even self-destruction. ... "

If it had not been for the worship of money which underlies all other values in the United States of America, it would have been impossible for Wall Street to act with such total impunity in their shameless scheme to con the U.S. citizens out of their savings and modest wealth.

Add to this poisonous brew of intolerant, fundamentalist religion and the puritan worship of money, the unrestricted faith in the country's superiority over all other countries, that is their unquestioning patriotism, their second religion, the die-hard belief that their country can do no wrong, and you get to where the country is today.

Deregulation and the silencing of the opposition

The superficiality of the U.S. citizens in accepting a man like George W. Bush as the President of the country seems perfectly unbelievable to most people outside the U.S. We know now how this was brought about, however, and it was not achieved from the superficial image of Bush as a man you'd like to have a beer with, the man with the friendly smirk, the popular appeal. No, it was much more carefully planned. And the sine qua non was to get a harmless president 'elected', that is get him parachuted into the White House so speedily that people wouldn't have time to react. We know how the neo-conservatives were all maneuvering to grab total power ever since the 1980s. The two essential preconditions for getting their scheme to succeed were the complete submission of the media and the buying up of the Congress via the lobbies. They succeeded in both enterprises beyond belief.

The deregulation movement got started under Ronald Reagan who instigated laws in favor of Big Business, which made it possible for this psychopathic set of neocons to scheme their way to power. This continuous trend in economic policies towards the Milton Friedmanesque [1] free market as the gospel for 'progress' killed off all the humanitarian laws that had been instituted by Franklin Delano Roosevelt with the New Deal after the Great Depression; now we are regressing towards tax cuts for the wealthy, deregulation of the savings and loan industry. Opening the floodgates for increased media consolidation and the war on Labor were also some of the major features pointing towards the radical take-over of the wealthy elite during the Reagan presidency. These deregulating trends were followed up faithfully by the succeeding administrations. This very much includes Bill Clinton who signed the horrendous NAFTA agreement declaring that "NAFTA means jobs, American jobs, and good-paying American jobs." (It is also pure nonsense that Reagan should be in any way credited with bringing down the Soviet Union and ending the Cold War, but that is the subject for another essay.)

This more or less underground neocon set of power-hungry lunatics was determined to achieve complete domination over all aspects of the United States, have total command over the three branches of government and, finally, most likely install a police state where elections and a government would not be needed any more. Democracy had become an empty word and unfettered capitalism was going to rule the world. The multinationals with their financial center in the United States were going to have complete economic control over the world and they managed very well with the major Asian economies during the Asian financial crisis, beginning in 1997. This severe crisis that threatened to bring about a global systemic financial meltdown was enhanced or, as some claim, even brought about by the "fast-track capitalism" methods of the International Monetary Fund and the World Bank. [2]

And what about the working people and the middle class who were going to see their comfortable living conditions disappear? Don't worry, said the neocons. They won't know what happened until it's too late. All the money goes to the clique that runs the corporations and the little people will be left with their religion. Drive up the hysteria and the coming of Armageddon to the boiling point and the fundamentalists will be so convinced that they are the ones who will be saved on the Day of Judgment they won't even worry about their money and their good lives trickling away. They are the ones who will go to Heaven, they and the good men and women in the government who believe, the way they themselves do, that God is with them, the people who pray for the country, for victory in the morally right wars and for all those who are convinced that the United States will always be the unrivaled leader of the world.

An important part of the neocon gospel consisted of depriving the poor of valid education and cutting down on entitlements that could serve to create more livable conditions for the poor and the middle class. Starving the beast was their motto. By the use of relentless propaganda and making sure they are kept in profound ignorance of the greed and corruption that are the true leaders of the country, the poor people who are the principal victims of this 'disaster capitalism' [3] are still the blind believers in this absurd system of government. There is no way you can make them believe that democracy is dead and that nobody in Washington cares a whit for their being totally left behind. [4]

What about the rest of the world? The neocons say 'We'll buy them up'. We'll get so much influence over the Middle East, India, China, Russia that nobody will have enough power to fight us. We'll hit them so fast they won't even have the time to put their pants on. The nukes the other countries have are firecrackers next to ours. If one country gets unruly, we'll take out its nukes in one big blow. Their arsenals are antiquated or they have just one or two tiny bombs for show. Africa and Latin America are powerless and if they ever go against the system we have set up, we will show them who has the muscles. Muscles, spelled B-O-M-B-S.

Now, fortunately, this infantile attitude to anything the government does as being unquestionably right, has of late been watered down. The missteps and the disasters have become so numerous and so glaring that even an intellectually challenged and half-blind American might begin to see through the lies and the fear-and-theft tactics of their criminal leaders. The country has gradually been brought to the edge of disaster over the past eight years of misrule, and the financial global meltdown which is now progressing might well change the world so drastically that we can't even guess at what is lying ahead.

However, the neocons have not given up on their free-for-all-to-see fight for global power. They are all set on destroying Barack Obama and the Democratic party and finally getting the complete power they were so close to achieving under the misrule of Bush/Cheney, the project they had insanely been working on for almost thirty years. [5] It might seem as if the Republicans wouldn't really have to destroy the Democrats, since they are all so indebted to Big Money that they could easily melt into one party, but the neocons want more than that. They are aiming at dictatorial power without any form of intrusion from the few humanitarian-minded Democrats who are still left in the House and the Senate.

One thing is certain. The raving lunatics will be back. Nothing can stand in their way, not even self-destruction.

[1] See Siv O'Neall: 'The Big Con Game', among multiple other sources on Milton Friedman, the father of the Chicago School of economics and the Free Market power-for-the-rich ideology. http://axisoflogic.com/artman/publish/article_29465.shtml

[3] Term used by Naomi Klein in her latest book 'The Shock Doctrine: The Rise of Disaster Capitalism'

Good article, except for one glaring part. There is no difference between the Republicans and the Democrats. The same elite own them both. Superficially, they are supposed to show differences and emphasize those differences whenever speaking, but if you are really living in Lyon, France, then you know for a fact that whoever is in the White House, or in control of Congress, has little to do with the direction of domestic and foreign policy.