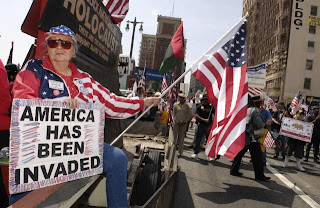 ... The illegals of today, at least the largest contingent in our neck of the woods, come from Central America plus Haiti and the Dominican Republic. This wave differs from the earlier waves in one important, but completely ignored, aspect.

The United States of America was, at best, complicit in the creation of the economic disasters and political terrorism that forced (and still forces) people to leave their homes and families and all that is dear to them to go to a faraway place where they are often despised strangers in a strange land.

Throughout the 20th century the business tycoons of El Norte used military and economic power to plunder Central America purely for profit. The long, disgusting line of fascist dictators funded, supported and defended by the United States, comprises a horrendous chapter of U.S. history of which most Americans are, apparently by choice, ignorant.

To get a picture of how bad it was I suggest the reader find a copy of "War is a Racket," a book written in the 1930s by Marine Gen. Smedley Butler. Butler, by the way, was awarded both the Congressional Medal of Honor and the Marine Brevet medal — not once, but twice. Not quite as heroic as the likes of Dick Cheney, I suppose, but ...

One would be hard pressed to name a country south of our borders where the lives of the common people have not been made difficult, and indeed impossible, by the murderous brigands backed by the armed might of the United States. Do the names Francois and Jean-Claude Duvalier, Rafael Trujillo, Anastasio Somoza, Alfredo Stroessner and Gustavo Pinochet mean anything at all to most Yanquis? Of course not; they, along with the countless juntas of Guatemala and Honduras, made life comfortable for themselves and hugely profitable for U.S. banking interests and multinationals, beginning with United Fruit (now United Brands).

This has not been a Democratic or Republican party issue. Franklin Roosevelt supposedly said that the elder Somoza "may be an SOB, but he's our SOB." Richard Nixon's CIA was involved in the assassination of Salvador Allende. Jimmy Carter supported the murderous Arena party in El Salvador, and Ronald Reagan thought the Guatemalan juntas were just ducky.

From the mid- to late 20th century the United States, the world's self-proclaimed bastion of democracy, took an active part in propping up dictators throughout the region via CIA-ordered murders of "leftist" (read desperately poor) rebels and a popularly/legally elected president, Salvador Allende of Chile. It ignored the state-ordered murders of Archbishop Oscar Romero and Maryknoll priests and nuns in El Salvador, trained "death squads" at the infamous (and still extant) School of the Americas, and, of course, was complicit in "Ollie's Follies," an attempt to overthrow the legitimately elected government of Nicaragua.

This is the heritage from which these "illegals" come. In some, but not all, situations, economies have improved, but the feeling of hopelessness is generational in some and others do not have the luxury of waiting for change at home. So they leave kith and kin and head for a place that they might find work.

Instead of being obsessed with defeating communism at the expense of poor people, past U.S. administrations could have helped develop political and economic systems beneficial to little people, not just the banks and corporations and allowing the average person to lead a decent life in his or her homeland. It is not too late to repudiate the past and begin to allow people to stay home, but we must deal with and not ignore the "collateral damage" of past policies and actions. ...