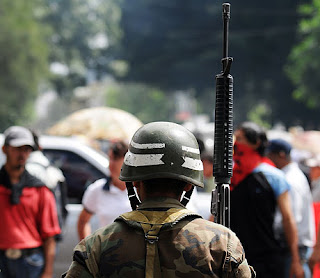 IN THE SUMMER of 1984, under the oversight of U.S. Ambassador John Negroponte, I was deported from Honduras with five other Americans for meeting with union representatives who wanted to tell us about the murders and disappearances of their leaders.

At the time, the poor nation was known as "the aircraft carrier USS Honduras" due to the attacks launched from it into neighboring Nicaragua by the Contras, the proxy force created by the U.S.

The current Honduran constitution was written in 1982 when Negroponte worked closely with Gen. Gustavo Alvarez Martinez, an Argentine-trained proponent of the death squads then killing leftist leaders. From 1981 to 1985, U.S. aid to the Honduran military went from $4 million to $77.4 million a year.

Such behavior was hardly new. Marine Gen. Smedley Butler described his service there in the 1920s: "I helped in the raping of half a dozen Central American republics for the benefit of Wall Street. The record of racketeering is long."

The leftward trend across Latin America that runs from Chile's European-style left to Hugo Chavez's strongman style is in large part a response to this legacy.

On June 28, soldiers broke into Honduran President Manuel Zelaya's home, threatened to kill him and put him on a plane to Costa Rica. Since then, there have been reports of violence and killings directed at Zelaya allies. The tension is increasing. No nation has recognized the coup.

Some say what happened wasn't a coup. Others say Zelaya broke the law and deserved to be removed. Some just mention Chavez, and that seems enough.

Secretary of State Hillary Clinton is reluctant to call it a coup because to do so would require breaking relations with the Honduran military elite we have a long and deep relationship with.

No one has adequately explained how Zelaya broke the law. What he seems to have done is what elected populist leaders do: pursued reforms that made waves in a society ruled by, and for, the rich and powerful.

He sought a nonbinding poll asking citizens whether they wanted a yes-no question on the November ballot about a constitutional assembly to rewrite the constitution, apparently quite legal under the 2006 Honduran Civil Participation Act.

Zelaya says the 1982 constitution, already rewritten 16 times, diminishes the rights of Honduras' poor, and has always said any changes, like a presidential second term, wouldn't apply to him, since his term ends in January.

For many Latin Americans, the coup is a direct assault on the larger democracy-based, reform-minded leftward trend. It recalls the reform-killing coups in Guatemala in 1954 and Chile in 1973.

The actions of the Obama administration have lagged behind its rhetoric, which suggests it may be using the coup, as one Washington pundit put it, to return Zelaya to office as a "neutered" president. The winner would be the military, which runs Honduras anyway.

The Clinton State Department is thick with right-wingers left over from the Bush administration who funneled millions in "pro-democracy" funds to elements involved in both the 2002 coup in Venezuela and the one in Honduras.

We know Zelaya had plans, approved by President Bush in 2006, to revamp the U.S.'s Soto Cano Air Base into a much-needed new civilian airport.

In exchange, the U.S. military was to get access to the Atlantic Coast. Coup leader Gen. Romeo Vasquez wanted to keep Soto Cano for the military.

Following the coup, a group of wealthy Honduran businesspeople and bankers with business interests in the U.S. hired Lanny Davis to sell the coup to North Americans. Davis was Bill Clinton's personal lawyer and backed Hillary Clinton for president. He defended the coup before a congressional hearing. His job is to smear Zelaya to make the coup palatable.

THIS IS reminiscent of Edward Bernays, "the father of public relations," who was instrumental to the success of the 1954 Guatemala coup, which overthrew President Jacobo Arbenz, who was undertaking land reform that the United Fruit Co. didn't like. The coup not only killed the Arbenz reforms, it ushered in what was probably the bloodiest military regime in hemisphere history.

Coup-spinner Davis assures us, "This is about the rule of law" and Zelaya "was acting unconstitutionally and illegally" when he sought to poll citizens about the 1982 constitution. Davis chose not to quote Article 3 of that constitution:

"No one owes obedience to a government that has usurped power . . . The people have the right to recur to insurrection in defense of the constitutional order."

If not overturned, this illegal coup can only contribute to less democracy and more violence in Latin America.

John Grant is a Vietnam veteran and a member of Veterans for Peace. He lives in Plymouth Meeting.