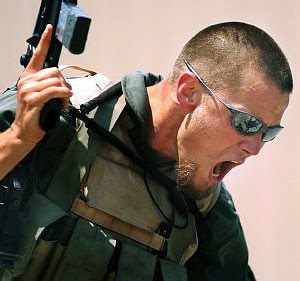 President Obama’s senior advisor, Valerie Jarrett, was confronted over the weekend with the fact that the administration continues contracting with the scandal-plagued mercenary firm Blackwater (which now does business as Xe Services and US Training Center). “He has to balance national security with transparency and I bet with him. I bet with him and I’m asking you to trust him,” Jarrett told a raucous crowd Saturday at the NetRoots Nation conference in Pittsburgh.

Jarrett was directly asked why Obama keeps paying millions of dollars to Blackwater -- a question which received substantial applause and which Jarrett failed to directly answer. Instead, she appealed to a commitment of faith in Obama by activists and bloggers. “I think the point of the matter is that you also have to say we are six months in. I think you have to accept the fact that some things are going to take a little bit of time and that you have to follow a process where you’re going to get some buy-in from the people who you are counting on,” Jarrett said.

The moderator of the event, Baratunde Thurston, asked Jarrett about Blackwater’s ongoing contracts with the U.S. government after a member of the audience shouted an off-mic question about Blackwater.

Jarrett, one of Obama’s closest friends and top advisors, also linked the Blackwater question to the safety of U.S. personnel in war zones: “Do not forget that we have men and women who are at risk every day overseas doing the very best they can to defend our country and so the president has to balance putting them at further risk with having the kind of transparent and open and clear availability of information that you so desperately want.” What this has to do with Blackwater is anyone’s guess. If what Jarrett was saying is that Blackwater keeps Americans safe abroad and therefore transparency on the company will not be forthcoming, then that is a pretty scandalous position. If Jarrett was referring to the administration’s blocking of the release of prisoner abuse photos (which was discussed earlier in the event), then it is a bankrupt argument.

The video is here. This exchange happens at around 2:38.