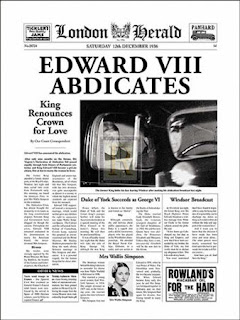 Last month's Channel 5 documentary about Edward VIII sought to portray him as an isolated figure. But support for Hitler and the Nazis was widespread among the British ruling class during the 1930s.

Channel 5’s documentary (Britain’s Nazi King Revealed, July 16th) on Edward VIII’s Nazi links was based on newly declassified FBI files. The playboy prince was roundly condemned by the programme’s voiceover, and Wallace Simpson, the twice divorced American he married, was depicted as a convenient pretext for forcing him into abdicating when, we were told, the real reason had been deep establishment suspicion of his pro-German views. The programme clearly wanted to present the British elite as having been anti-fascist from the start. That this was not so, that the British establishment was extremely forgiving towards Edward and deeply sympathetic to fascism, was airbrushed out of the story.

The facts presented were nonetheless remarkable. Simpson had been the lover of German Ambassador von Ribbentrop, (who went on to become Hitler’s foreign minister); and as Prince of Wales, heir to the throne, Edward was earmarked by Hitler as a potential puppet king after the Nazi victory.

Edward, the handsome “Prince William times 10” of his day, according to historian Andrew Roberts, had close family ties to Germany, spoke German often at home and considered the language his ‘muttersprache’. The House of Saxe-Coburg Gotha (previously the surname of our royal family) hit on the name Windsor – an arbitrary choice, based on one of their many castles – in an attempt to anglicise themselves. Edward became the “face of the British crown abroad” and was an early media celebrity.

The programme argued convincingly that there were doubts in ruling circles about Edward’s suitability for the throne because of his indolent, decadent lifestyle, his many affairs and his devotion to the gold-digging American. A philistine, who found Jane Eyre too dull to read, he became king on George V’s death in January 1936. Germany’s faith in his usefulness proved well-founded. He talked frequently to the German ambassador about political issues, bypassing Baldwin’s government. As a result, Hitler was confident that the King of England would not oppose the German annexation of the Rhineland.

After the abdication in December 1936, Edward and Wallace Simpson sailed in a Nazi ship, the Bremen, to Germany, where they were feted – in a great propaganda coup for the Nazis. “It’s a shame he’s no longer king,” said Goebbels, though the Nazis realised he could still be effective as a legitimising figurehead for a future British fascist government. In May 1939, only 4 months before the war began, Edward pleaded publicly for peace with Germany. According to the voiceover the BBC refused to broadcast this, but no evidence was given for this assertion.

When Hitler’s written invasion plans for France were intercepted after the plane carrying the papers crashed, Edward informed the Germans of the fact, and Hitler promptly changed his battleplans from a movement through the lowlands to a sweep through the Ardennes, taking the allies by surprise. Edward decided not to evacuate from France with his beleaguered former regiment, the Middlesex, but instead scuttled south to Biarritz, immediately contacting Ribbentrop from there and requesting of the Gestapo – even as the Dunkirk evacuation was taking place – that they collect his belongings from Paris. Then he and Simpson went on to Franco’s Spain, hobnobbing with fascist banker Ricardo Silva there. 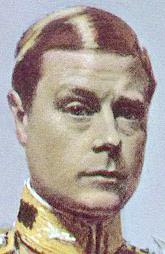 Churchill sent them on to Portugal. In Estoril, a hotbed of Nazi spies, Edward advised the Germans in July 1940 that “continued heavy bombing would make England ready for peace.”

Even after committing such a clearly treasonable act, Edward was not arrested and executed, but was taken from Lisbon to the British Bahamas, where he continued his Nazi propaganda from his new position of governor-general. In an interview with an American journalist, he called Hitler a great man and advised the journalist to tell this to Mr Roosevelt – in an effort to persuade the USA not to enter the war. The narration described his posting to the Bahamas as ‘exile’, to imply that the British ruling class had taken a tough line with him. That was clearly not the case.

Such a gloss was typical of the Channel 5 programme, covering up the extent of British collaboration with Hitler, which was considerable. Support for fascism was endemic in the UK's ruling class, with both the British press barons, Rothermere and Beaverbrook, sympathetic to fascism – the former directly funding Oswald Mosley, the Leader of the British Union of Fascists. Rothermere proclaimed in 1933: “The sturdy young Nazis of Germany are Europe’s guardians against the communist danger.” Churchill had praised Mussolini’s fascism for similar reasons, and just three days before the Nazis marched into Poland, Britain’s ambassador to Berlin, Henderson, pledged an alliance with Germany.

Well into 1940, Britain was still exporting goods to Italy and supplying crude oil to Japan. When Adolf Hitler's deputy, Rudolph Hess, landed in Scotland seeking an audience with the sympathetic Duke of Hamilton, he had good reason to believe that sections of the British ruling class would support him. The Anglo-German Fellowship, whose big business members boasted the directors of the Bank of England and all the major banks and insurance firms, plus Shell, Unilever, ICI, Tate and Lyle and more, invited Himmler to address it.

Far from being in a thorn in the side of a staunchly anti-fascist establishment, what King Edward VIII actually represented, then, was a powerful current within the British ruling elite. Similar fifth columnists existed everywhere – in France, Pierre Laval, who became the head of the Vichy regime in France and was executed after the war, had been French Prime Minister twice, in 1931-2 and 1935-6. In Russia, the Moscow trials uncovered plotting among the highest echelons of the ruling Communist Party, a fact verified by Churchill in his diaries, who noted that the then Czech president Benes, “became aware that communications were passing through the Soviet Embassy in Prague between important personages in Russia and the German Government. This was part of the so-called military and Old-Guard-Communist conspiracy to overthrow Stalin and introduce a new regime based on a pro-German policy. President Benes lost no time in communicating all he could find to Stalin. Thereafter there followed the merciless, but perhaps not needless, military and political purge in Soviet Russia, and the series of trials in January 1937… The Russian army was purged of its pro-German elements…”

After the war, many British establishment figures continued to visit the fascist royals in Paris. Frank Giles, for instance, who edited the Sunday Times and had known them personally before the war, dined with the couple in Paris. Giles, interviewed on the programme, recounted his shock at Edward blaming Roosevelt and the Jews for having brought on the war. His response? He “thought about leaving the room”.

After Edward’s death in 1972, the unrepentant Nazi was brought back from Paris to be buried in Windsor Castle, and his wife was buried beside him in 1986. This posthumous rehabilitation provides a far truer measure of enduring British ruling class attitudes to fascism than the makers of the Channel 5 documentary would have us believe.
Posted by Alex Constantine at 8:01 PM