Polls: Half Of Doctors Refuse To Take Swine Flu Shot 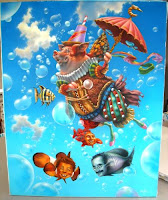 ... [A] poll conducted by GP magazine reveals that Up to 60% of GPs have severe doubts over the proposed vaccine. Of 216 GPs surveyed, 29% say they will outright refuse to be vaccinated, while a further 29% remain unsure. Only 41% of doctors said they would definitely take the shot.

Of those who said they would not take the shot, 71% said they were concerned that the vaccine had "not been through sufficient trials to guarantee its safety". Over half, 50.4%, said they "believe that swine flu is too mild to justify taking the vaccine".

The Department of Health sought to dismiss the results, declaring that the small number of responders to the surveys was not reflective of the opinions of all doctors.

However, these figures also dovetail with those from a much larger Nursing Times magazine poll, that revealed 30% of all NHS nurses said they would refuse to be immunized, with another 33% saying they were unsure.

Of the 30% of nurses who said they would refuse to be vaccinated, 60% said the reason was due to fears about the safety of the vaccine, following revelations that the shots will contain mercury and squalene and have also been linked with the killer nerve disease Guillain-Barre Syndrome. Another 31% said they would refuse the vaccine because they did not consider the risk from swine flu to be great enough. ...
Posted by Alex Constantine at 12:51 PM