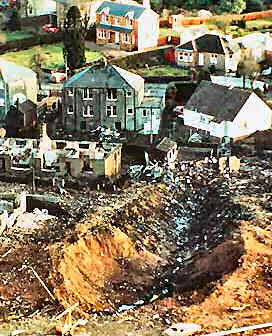 Long before the Scottish Criminal Cases Review Commission (SCCRC) announced its spectacular decision to grant a fresh appeal to the Libyan man convicted of the worst act of terror in the U.K., Lord Fraser, who issued the warrant for his arrest, had expressed doubts about the initial verdict.

Family members of the 270 victims promptly grasped the significance of Lord Fraser's admission.

"Lord Fraser had detailed knowledge of events and I think we have to take seriously anything he says now that is relevant to those who gave evidence at Zeist. It is significant that a man who has been as close as he has to the investigation should be making comments like this," said Jim Swire, who lost his daughter Flora in the tragedy and currently represents the U.K. Families Flight 103 association.

A careful reading of the news release by the SCCRC justifying the commission decision to declare the verdict without reasonable basis, can only led one to conclude that the crown had no evidence, let alone conclusive evidence, in the case against Abdul Baset Ali al-Megrahi.

Why then did Lord Fraser issue an arrest warrant against him in the first place? The answer to this rather intriguing question is both simple and extraordinary. Lord Fraser indicted Megrahi based on fabricated evidence provided by U.S. authorities.

One year into the Zeist trial, the prosecutors were told for the first time that the evidence had been fabricated by a former Libyan agent who had become a CIA asset in 1988. Internal CIA cables show that the agency was well aware since 1988 that the man was a fabricator. The Zeist trial constitutes the only case in history where internal CIA documents were used in a foreign court.

As a rule, the Scottish Prosecution Authorities have a duty to investigate the credibility of their witnesses before they issue an arrest warrant. In the Megrahi's case, they did not. As they blindly trusted their U.S. partners, they failed to perform one of their most basic obligations.

Instead of admitting the fact, they tried to cover it up, thus violating Scottish Criminal Law, which requires the prosecution to provide the defense with any significant information susceptible to help their cause.

Abdul Majid Giaka was a member of the Libyan Intelligence Service, or at least so he claims. In August 1988, Giaka offered his services to the CIA.

As soon as he defected, his handlers in Malta began to send cables to CIA headquarters in Langley concerning his credibility.

About a year later, his CIA handlers had reached the conclusion that Giaka was just some kind of a con artist. They doubted that he had ever been a Libyan agent and feared that he could not possibly provide any valuable information, in which case his CIA stipend should be terminated.

Clearly, we can deduce from the CIA agents' disappointment that -- nine months after the Lockerbie bombing -- Giaka had provided no relevant information whatsoever about the affair.

During the next two years, he never told his handlers anything about the Lockerbie bombing, even when explicitly asked if he knew anything about the possibility that the bomb may have been planted on Pan Am 103 while the plane was sitting on the tarmac of Luqa airport in Malta. Under cross-examination, he admitted that much during the trial.

Then after a dubious witness (who has since been discredited) made a very tentative identification of Megrahi, Giaka suddenly metamorphosed into an eyewitness who could link Megrahi directly to the bombing.

Giaka's credibility was quickly destroyed and the three judges on the panel came to the obvious conclusion that they could not accept Giaka as a credible and reliable witness. And that should have been the end of it. Without any credible evidence against him, Megrahi should have been acquitted.

Yet the panel found him guilty in a verdict that many legal observers have described as one of the most spectacular miscarriages of justice in history. Last month, after three years of investigation, the SCCRC concluded that no reasonable jury, properly directed, could have returned such a verdict.

As I consider beyond belief that a three-year U.S.-U.K. joint investigation could not uncover a single shred of authentic evidence linking Megrahi to the bombing, I have little choice but to conclude, as many have suspected over the years, that an innocent man is serving a life sentence in a Scottish jail.

The conclusion has profound effects as it also implies that U.N. sanctions may have been wrongly imposed over a nation for almost a decade. It also means that the culprits of this odious act of terror have escaped justice.

Prime Ministers Margaret Thatcher, John Major and Tony Blair have consistently opposed the independent inquiry of the Lockerbie bombing so much desired by the families of the victims.

In the words of Justice Secretary Jack Straw, nothing further could be learned from such inquiry. Yet, the former foreign secretary's position on the matter stands clearly at odd with a cryptic, yet abundantly clear, statement by the Iron Lady.

About the 1986 U.S. bombing of Tripoli, which made use of U.K. air bases and during which the two-year-old daughter of Col. Muammar al-Qaddafi died, Thatcher wrote in her 1993 memoirs: "There were revenge killings of British hostages organized by Libya, which I bitterly regretted. But the much vaunted Libyan counter-attack did not and could not take place."
http://trinicenter.com/cgi-bin/selfnews/viewnews.cgi?newsid1185265111,1476,.shtml
Posted by Alex Constantine at 8:30 PM

I have long doubted the charges against Abdel Basset Ali Al-Megrahi as being responsible for the PanAm Airliner that was blown up over Lockerbie, Scotland. One of the unvestigators an Austrian told me that Al-Megrahi was convicted on orders from the U.S. government. All the evidence was circumstantial and other than that there was no proof that Al-Megrahi had a hand in it.