Al-Megrahi filed an appeal arguing his innocence, a small matter that the United States finds irrelevant and even irritating, because if it comes out that CIA cut-outs were involved, America would never live down the embarrassment. The Agency went to great lengths to win a conviction - went so far as to concoct evidence and tamper with witnesses so Magrahi would appear guilty, blackmailed Libya into taking responsibility for the bombing of Pan Am Flight 103 with trade barriers - Ghaddafi recanted as soon as they were lifted. Rather than risk exposure in the appeal, quid pro quos just starting to be reported in the UK are spilling out in the press to howls of public indignation. Americans are too drugged to get upset about it, but there bave been some snorts of rage in the States, as well - but for all the wrong reasons. The outrage isn't that Magrahi was released. That's brain-dead propaganda consistent with the cover story; he should have never been sentenced. The ourrage is that Oliver North's Enterprise and the CIA got away with covering up their involvement in drugs and terrorism by blowing up Flight 103 and the military investigators on board. Someday, when the drugs wear off, Americans may get upset about that, too, but I seriously doubt it. - AC 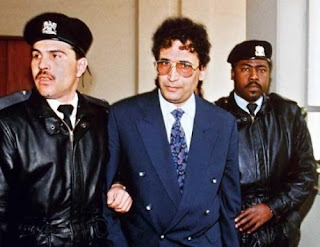 On Sunday in Libya, Abdel Basset Ali al-Megrahi, the only person convicted in the 1988 bombing of Pan Am Flight 103 over Lockerbie, Scotland, was rushed to a hospital, past a British television crew hoping to interview him, two days after a report in a British newspaper suggested that he might live longer than expected.

As Jonathan Miller of Britain’s Channel 4 News explained in the video report embedded above, Mr. Megrahi, who reportedly received thousands of visitors at his family home in Tripoli in the days after his return, was said to be too sick to answer any questions on Sunday when the reporter was invited into his hospital room with a camera crew.

The Associated Press reported that a Libyan official announced on Monday that Mr. Megrahi was in the hospital and described him as “a dying man.”

Mr. Megrahi flew back to Libya on Aug. 20 after the Scottish government ordered his release on compassionate grounds. The Scottish authorities and Mr. Megrahi’s lawyers said he had terminal prostate cancer.

But last Friday, The Times of London reported that “the prognosis that Abdel Baset Ali al-Megrahi had a life expectancy of only three months or less was supported by an unnamed doctor who had no expertise in terminal prostate cancer.”

When Scotland’s justice secretary, Kenny MacAskill, announced his decision to release Mr. Megrahi, he explained that “there are no fixed time limits” in the Scottish law granting him the power to free terminally ill prisoners, but he was following guidance that suggested that “life expectancy of less than three months may be considered an appropriate period.”

According to part of a report on Mr. Megrahi’s medical condition by Dr. Andrew Fraser, the Scottish Prison Service’s director of health, the estimate that Mr. Megrahi had less than three months to live at the start of August was not made by cancer specialists. (The report, written for Mr. MacAskill, has been posted on the Times of London Web site.) Dr. Fraser wrote that he had taken estimates made by specialists last autumn that Mr. Megrahi had 18 to 24 months to live and revised them downward after speaking with another doctor who had treated the former Libyan intelligence officer.

On Monday, Mr. MacAskill defended the medical advice he used to make his decision in this video interview with the BBC. The BBC also reported that an opposition member of Scotland’s Parliament who is also a prostate cancer specialist, Dr. Richard Simpson, said that Dr. Fraser’s report showed that “the justice secretary chose to disregard the advice of four specialists and release Megrahi on the opinion of one doctor, who we know was not a specialist.”

While no medical experts seem to doubt that Mr. Megrahi does have terminal cancer, the possibility that he might not be about to die has further enraged some opponents of his release in Britain.

Comments made by Mr. Megrahi’s father to an Arabic newspaper based in London, Asharq Al-Awsat, last week, suggesting that his son’s condition “is not that serious as some news media have been portraying,” only added to the furor. Ali al-Megrahi also told Asharq Al-Awsat that he was still hoping for his son’s recovery since “a relative was diagnosed with a similar disease and he was treated and recovered completely.”