From "Myths About Universal Medical Coverage," by Jim Sida, Mesquite Local News, 7-31-09: " ... The whole impetus for the Medicare program was to provide our nation’s senior citizens with a medical lifeline. Up until that time, many older Americans went without medical care or were treated as charity cases. Sadly, many folks who had worked all of their lives and contributed to our society didn’t fare well under our old system and either died at an early age or finished out their autumn years in poverty, sickness and poor health.

"Health care providers benefited from Medicare because for the first time they began to be compensated for treating our senior population. Is Medicare a perfect system? Of course not; however, because of Medicare older Americans are living longer and are in better health than ever before, free to live a life with dignity and liberated from the crushing burden of medical costs. ... "
http://www.mesquitelocalnews.com/viewnews.php?newsid=3420&id=60 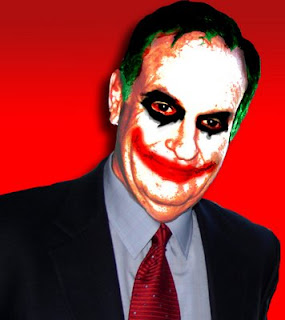 Bill "No Spin" O'Reilly takes off his make-up

Tea Party" boneheads who protest health care will, of course, burn their Medicare cards when they hit 65 and look to the Republican Party for medical coverage.

"Liberals" (anyone not buying "conservative" rhetoric) are looking to the Tea Partiers to act on their convictions and stop sucking the blood of the state, like fat Nazi-Maoist leeches on the dole. You are rugged, self-sufficient, loyal American individualists. I'm sure the GOP will gladly cover the health care costs of party-goers. Those desperate "useless eaters" "conservatives" have been murdering by denying them medical care will be grateful that they won't have to pay to keep aging Republicans alive.