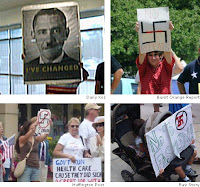 Lessons of the death of Obamacare
By TED RALL
www2.hernandotoday.com
August 20, 2009

Ted Rall, president of the Association of American Editorial Cartoonists, is author of the books "To Afghanistan and Back" and "Silk Road to Ruin."

What worries me: "time and time again," writes Brendan Skwire in the Philadelphia Weekly about the circuses which are currently passing for Democrats' town hall meetings on health care, "[is that] the needs of the stupid and disingenuous are not only treated as valid concerns, but as the greatest concerns."

Well, yes. This being the United States, one of the most gleefully anti-intellectual nations on Earth, stupid people aren't pathetic dolts to be pitied or perhaps sent to a reeducation camp. They're the shining example we're supposed to look up to.

Obamacare, whatever it is or was going to be once the president saw fit to share it with the public, is dead. That it would die a dog's death was predictable, so predictable that I predicted it a couple of months ago.

"No one is going to call their Congressman, much less march in the streets, to demand action for a half-measure — or, in this case, a quarter-measure," I wrote then. "Without public pressure to push back against drug and insurance company lobbyists, nothing will change."

The latest Rasmussen Poll shows most Americans are against Obama's vague "public option," 53 percent to 42.

There was public pressure, all right — from the right. Limbaugh and Hannity stirred up a hornet's nest of frenzied morons, throwing around words like "fascist" and "Nazi" as if they didn't know that they referred to themselves, which of course they didn't. They turned out, bigger and louder than the president's supporters, who were handicapped by (a) not exactly knowing what they were being shouted over about and (b) not really caring that much because there wasn't much in it for them.

I pay $800 a month for private health insurance. That's $10,000 a year, or about $14,000 in pre-tax earnings. If Obama had proposed European-style socialized medicine, wherein doctors and nurses are government employees, I would have stood to have been $14,000 a year richer. As for workers who get health care insurance through their employers, Obama could have required all bosses to pass along the savings by giving their employees a $14,000-a-year raise. 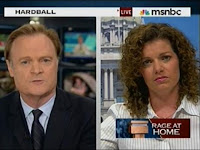 $14,000 is definitely motivation enough to pry me away from my usual Netflix evening in order to outshout the rednecks at my local town hall. How about you?

Now Obamacare is dead. The good part is that, because it wouldn't have made much difference in our lives anyway, it doesn't much matter.

Still, there are political lessons to be learned:

Lesson one: Violence works. The more rambunctious right-wingers showed up with assault rifles outside halls where the president was speaking. Can you imagine what would have happened if lefties had brought their AK-47s to anti-Iraq War rallies? The cops would have killed them. Their friends and relatives would have disappeared into some Bushie secret prison in Romania. Or maybe the Bush junta would have gotten so scared the war would never have happened.

The death of Obamacare is merely the latest evidence of a fact that the left, in thrall to militant pacifism, refuses to see. Only two means exist in order to effect change: Violence or the credible threat thereof. The charged atmosphere of imminent violence permeating the town hall meetings intimidated liberal wimps from the grassroots to the Oval Office.

Lesson two: Incrementalism never works. The Bush administration, which barely controlled the Senate and was widely viewed as electorally illegitimate, managed to ram through dozens of pieces of radical, sweeping legislation and start two wars from thin air. Obama's Democrats have a presidential mandate, a filibuster-proof majority in the Senate and a commanding lead in the House — yet they still haven't pushed through a single significant bit of liberal legislation. The difference is strategy: Republicans under Karl Rove shored up the base, declared themselves the only "real" Americans and ran roughshod over the Democrats.

Obama, on the other hand, didn't so much lose the health care debate to right-wing attack ads as he argued with himself so long that he ended up winning — and therefore losing. Rather than demand socialized medicine, he proposed a "public option," whatever that meant, in a doomed bid to gain political cover by convincing a few moderate Republicans to break ranks. Now he's given that up in favor of some "co-op" thing. Forgotten in all the noise: There hasn't even been a vote on a health care bill.

Lesson three: It's easier to motivate stupid people. Democrats, led by their professorial boy president, thought they would win the health care battle with logic and charts. Republicans understood the truth: There are more stupid Americans than smart ones, and it's easy to stir them up by threatening to take away their guns and kill God (socialism).

Old-school Democrats like FDR and LBJ didn't bother to appeal to Americans' non-existent intellects. They rammed through laws that improved people's lives. People like to live better. So they stuck.

Obama should have done the same.