" ... The AFP reported, 'A US television news station last month reported that an "alarming number" of iPods "have suddenly burst into flames and smoke, injuring people and damaging property."' ... " 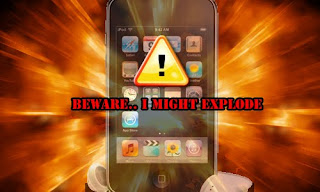 Is it getting to the point where you can't hold your favorite piece of portable technology without worrying about your health? It has been bad enough, what with reports of exploding cell phones, or spontaneously combusting laptops, but now the news perhaps many consumers dreaded. Yes, it's the Apple iPod's turn to face the, ahem, fire. A complaint has been filed by a Kentucky mother, Lynette Antrobus, claiming that her son's iPod Touch exploded in his pocket, burning him.

The complaint described the event, stating that her son, A.V. was sitting at his desk at school in Kentucky "with his Apple iTouch in the off position in his pant's pocket." A.V. then "heard a loud pop and immediately felt a burning sensation on his leg." Upon standing he "realized his Apple iTouch had exploded and caught on fire in his pocket" then ran to the bathroom and took off his burning pants with a friend's help.

Setting aside the emotional and psychological disaster that the possible loss of someone's treasured musical vault could entail, the injuries allegedly suffered by the child in this case were nothing trivial. According to the complaint, A.V. "suffered second degree burns to his leg" and "continues to suffer from both physical and mental conditions which will cause him to suffer pain, mental distress, emotional distress, and otherwise for the rest of his life." The suit sets out a variety of theories of liability for the various defendants, including, strictly liability for the defective product, as well as a failure to adequately warn. The bottom line for the injuries suffered by plaintiff, however, adds up to over $200,000 in various types of damages, including punitive damages for defendants' "malicious" actions.

At this time, there has been no comment from Apple on the case. ...

IPhones are a status icon today; it identifies you with being cool and up-to-date in regards of having money or being technologically savvy. Now if you don't have one, don't be upset. Apparently some iPhones have been exploding! You're friend's iPhone could be a ticking time bomb!

According to reports, the first case came about when a French teenager's Apple iPhone exploded into his face [story posted below]. There was also a second claim in Britain of an exploding iPod. Apple spokeswoman of the EU told them that these are merely "isolated incidents" and an investigation is still on going.

The AFP reported, "A US television news station last month reported that an "alarming number" of iPods "have suddenly burst into flames and smoke, injuring people and damaging property." The station said that Apple lawyers tried to stop it from getting hold of hundreds of pages of iPod-related documents which included information on "15 burn and fire-related incidents blamed by iPod owners on their iPods."

MARSEILLE, France (AFP) - A French teenager suffered an eye injury when his girlfriend's iPhone shattered, a few weeks after a similar incident involving an iPod in Britain, his mother said Wednesday.

The phone began making a hissing noise and the screen suddenly broke, sending pieces flying in the air, said Marie-Dominique Kolega who contacted Apple over the incident.

"My son was frightened but he did not lose an eye," Kolega told AFP.

The incident in Aix-en-Provence in southern France occurred a few weeks after a brouhaha in Britain over an exploding iPod owned by an 11-year-old girl.

Apple allegedly offered a refund for the girl's iPod on condition that the family sign a confidentiality agreement. 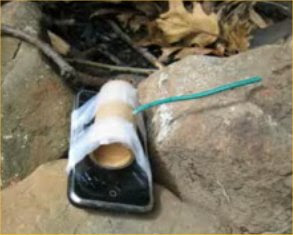 It’s an investigation that Apple has apparently been trying to keep out of the public eye.

It took more than 7-months for KIRO 7 Consumer Investigator Amy Clancy to get her hands on documents concerning Apple’s iPods from the Consumer Product Safety Commission because Apple’s lawyers filed exemption after exemption. In the end, the CPSC released more than 800 pages which reveal, for the very first time, a comprehensive look that shows, on a number of occasions, iPods have suddenly burst into flames, started to smoke, and even burned their owners.

Owners like Jamie Balderas of Arlington, Washington, who contacted KIRO 7 in November of 2008.

“At first I thought, how in the heck did I get burned? Right there?” she told Clancy, while pointing to a penny-sized, round burn on her chest. “Then I remembered that I had my iPod right there.”

Balderas says her brand new iPod Shuffle overheated while she was running days before, leaving her with a small burn right where the iPod was clipped to her shirt, next to her skin. “My skin started burning really bad, like it was a bee sting that wouldn’t stop.”

Concerned, Balderas says she called Apple, wondering if such burns were common. She even sent the company photos of her wound. But Balderas says she was told by an Apple customer service representative that her burn was an isolated incident. She says she asked Apple if she could get some documentation on how many other times this had happened, and what Apple was doing to correct the situation. But Balderas claims the Apple customer service representative told her that she “wouldn’t be able to have access to it.”

Jumping online, KIRO 7 Consumer Investigators found plenty of complaints about iPods overheating. Bloggers post photos of their charred and melted iPods. And in Japan, the government even issued a warning to consumers citing "a number of accidents in which iPod Nanos" overheated and sparked, injuring two people.

That led Clancy to file a Freedom of Information Act request with the Consumer Product Safety Commission last December, asking to see all complaints related to iPods and burns or fire.

When the documents finally arrived more than seven months later, they included more than 800 pages of information, including 15 burn and fire-related incidents blamed by iPod owners on their iPods. One of the owners found in the documents was Haylie Mooney of Portland, Oregon. She spoke with Clancy recently about what happened with the iPod she received for Christmas, 2007.

“I picked it up and it was really hot, and so my first instinct was to drop it so I didn’t burn myself. But I looked at my hand and it was red and it started to get swollen.”

Mooney is now 14 years old, but says she remembers the incident well. “It was like touching the inside of an oven. It was very hot.”

Haylie’s mother, Tami Mooney, called Apple to complain. She claims she got the run-around. “I was so frustrated because frankly, they didn’t care. They didn’t care that my child was burned. They didn’t care about the possibilities that other children were burned,” she told Clancy at her Portland-area home. “I asked them, has this been happening? Is this new? And they said, we haven’t heard of this one yet.”

But by then, Federal records show that Apple did already know it had problems with its iPod batteries causing fires and burns.

Detailed in the documents Clancy obtained was the story of an iPod overheating "causing damage to home and harm to minor son" in Pennsylvania in 2005.

In 2006, a 17-year-old Illinois girl awoke to find her iPod Nano "smoking and sparking."

A Staten Island man "sustained a minor shock and some redness to his left hand" when he yanked his iPod Shuffle from the USB port after noticing "sparks and a reddish/orange glow." Also in 2006.

That same year, an iPod "caught fire aboard a ship with over 2000 persons onboard."

In 2007, fire alarms at a home in New York went off after an iPod Nano started smoking. According to the CPSC report, smoke was "billowing" out of a teenage girl's bedroom because her iPod had "caught on fire," had "somehow fallen on the chair next to the desk," causing the chair to "smolder."

Also that year, in Atlanta, Daniel Williams' Nano suddenly burst into flames while in his pocket. He spoke about the incident to KIRO 7's sister station, WSB-TV. “So I looked down and I see flames coming up to my chest, about here,” he told a reporter in October of 2007.

In 2008, a Michigan couple awakened by smoke alarms and rushed into their sleeping son's room to find his iPod smoking and melted.

Six other similar claims are also detailed in the CPSC documents obtained by KIRO 7 Consumer Investigators. The complaints concern various iPod models, some charging at the time, some not. Some were older models, some brand new. ...